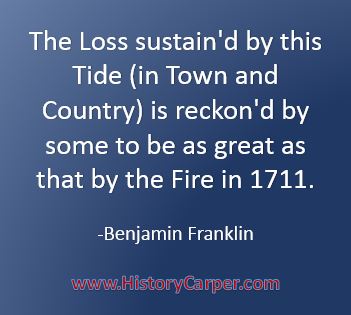 On Lord’s Day, the 24th past, we were surprized with the extraordinary Heighth of the Tide, which fill’d most of the Streets as well as Cellars near the Water, insomuch that many People living in Drawbridge-Street, Union-Street, and some other Places, were carry’d to their Houses in Canooes, after the Morning Service was over. In some Houses the Water rose so high in their lower Rooms as that they were oblig’d to run away with their Meat half dress’d upon their Spits and in their Potts into some of their Neighbours, or into their upper Rooms, their Fire being all put out, and the Wood floating about the Rooms. The Cordwood, Shingles, Staves, &c. were all wash’d off the Wharffs and carry’d into the Harbour, or left in the Streets after the Tide was down. The Water rose so high in the Ship Carpenters Yards, that they fear’d the Vessels would be carried off the Stocks, and made them fast with Ropes to the Tops of the Houses. The Loss sustain’d by this Tide (in Town and Country) is reckon’d by some to be as great as that by the Fire in 1711. Charlestown likewise suffer’d very much; and we hear a great Number of Whaleboats have been carry’d from the shore towards Cape Codd, where the Tide was never known to come before. They write from Newport on Rhode-Island, that the Tide has entirely wash’d away several Wharffs, and done great Damage in several Warehouses and Dwelling Houses near the Water. By an Article in the Boston News-Letter of Thursday last, we are told, that, The many great Wharffs which since the last overflowing Tides have been run out into the Harbour, and fill’d so great a Part of the Bason, have methinks contributed something not inconsiderable to the Rise of the Water upon us. And upon the Authority of this News Letter, some begin to blame the Dutch for damming out the Sea, and sending the Tide over the Atlantick upon us: Some more reasonably conclude, that a large Fleet of Ships have been sunk in the Storm upon our Coast, (the Wind blowing hard at North East,) which occasion’d the rising of the Tide. Others have upon this Account, framed a new Hypothesis to solve the Phaenomena of Noah’s Flood, and very rationally suppose, that the Antediluvians brought the Deluge upon themselves by running too many Great Wharffs out into their Harbours. So that the Notions (which were not without their Probabilities) of Burnet, Warren, Whiston, &c. who were troubled with the Distemper called Hypothesimania, seem now less probable than ever.