TO THE MASSACHUSETTS HOUSE OF REPRESENTATIVES:

GENTLEMEN, London, 15 May, 1771. I have received your favor of the 27th of February, with the Journal of the House of Representatives, and copies of the late oppressive prosecutions in the Admiralty Court, which I shall, as you direct, communicate to Mr. Bollan, and consult with him on the most advantageous use to be made of them for the interest of the province.

I think one may clearly see, in the system of customs to be exacted in America by act of Parliament, the seeds sown of a total disunion of the two countries, though, as yet, that event may be at a considerable distance. The course and natural progress seems to be, first, the appointment of needy men as officers, for others do not care to leave England; then, their necessities make them rapacious, their office makes them proud and insolent, their insolence and rapacity make them odious, and, being conscious that they are hated, they become malicious; their malice urges them to a continual abuse of the inhabitants in their letters to administration, representing them as disaffected and rebellious, and (to encourage the use of severity) as weak, divided, timid, and cowardly. Government believes all; thinks it necessary to support and countenance its officers; their quarrelling with the people is deemed a mark and consequence of their fidelity; they are therefore more highly rewarded, and this makes their conduct still more insolent and provoking. 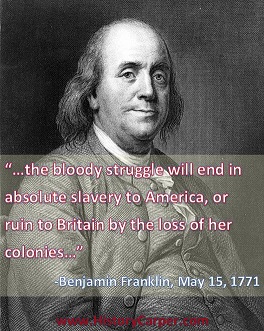 The resentment of the people will, at times and on particular incidents, burst into outrages and violence upon such officers, and this naturally draws down severity and acts of further oppression from hence. The more the people are dissatisfied, the more rigor will be thought necessary; severe punishments will be inflicted to terrify; rights and privileges will be abolished; greater force will then be required to secure execution and submission; the expense will become enormous; it will then be thought proper, by fresh exactions, to make the people defray it; thence, the British nation and government will become odious, the subjection to it will be deemed no longer tolerable; war ensues, and the bloody struggle will end in absolute slavery to America, or ruin to Britain by the loss of her colonies; the latter most probable, from America’s growing strength and magnitude.

But, as the whole empire must, in either case, be greatly weakened, I cannot but wish to see much patience and the utmost discretion in our general conduct, that the fatal period may be postponed, and that, whenever this catastrophe shall happen, it may appear to all mankind, that the fault has not been ours. And, since the collection of these duties has already cost Britain infinitely more, in the loss of commerce, than they amount to, and that loss is likely to continue and increase by the encouragement given to our manufactures through resentment; and since the best pretence for establishing and enforcing the duties is the regulation of trade for the general advantage, it seems to me, that it would be much better for Britain to give them up, on condition of the colonies undertaking to enforce and collect such, as are thought fit to be continued, by laws of their own, and officers of their own appointment, for the public uses of their respective governments. This would alone destroy those seeds of disunion, and both countries might thence much longer continue to grow great together, more secure by their united strength, and more formidable to their common enemies. But the power of appointing friends and dependents to profitable offices is too pleasing to most administrations, to be easily parted with or lessened; and therefore such a proposition, if it were made, is not very likely to meet with attention.

I do not pretend to the gift of prophecy. History shows, that, by these steps, great empires have crumbled heretofore; and the late transactions we have so much cause to complain of show, that we are in the same train, and that, without a greater share of prudence and wisdom, than we have seen both sides to be possessed of, we shall probably come to the same conclusion.

The Parliament, however, is prorogued, without having taken any of the steps we had been threatened with, relating to our charter. Their attention has been engrossed by other affairs, and we have therefore longer time to operate in making such impressions, as may prevent a renewal of this particular attempt by our adversaries. With great esteem and respect, I have the honor to be, &c.;