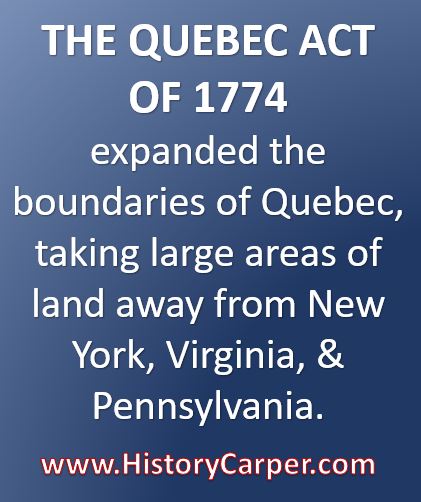 WHEREAS his Majesty, by his royal proclamation, bearing the date the seventh day of October, in the third year of his reign, thought fit to declare the provisions which have been made in respect to certain countries, territories, and islands in America, ceded to his Majesty by the definitive treaty of peace, concluded at Paris on the tenth day of February, one thousand seven hundred and sixty three: and whereas by the arrangements made by the said royal proclamation, a very large extent of country, within which there were several colonies and settlements of the subjects of France, who claimed to remain therein under the faith of the said treaty, was left, without any provision being made for the administration of civil government therein; and certain parts of the territory of Canada, where sedentary fisheries had been established and carried on by the subjects of France, inhabitants of the said province of Canada, under grants and concessions from the government thereof, were annexed to the government of Newfoundland, and thereby subjected to regulations inconsistent with the nature of such fisheries: may it therefore please your most excellent Majesty, by and with the advice and consent of the lords spiritual and temporal, and commons, in this present parliament assembled, and by the authority of the same, That all the territories, islands, and countries in North America, belonging to the crown of Great Britain, bounded on

And whereas the Provisions made by the said Proclamation, in respect to the Civil Government of the said Province of Quebec, and the Powers and Authorities given to the Governor and other Civil Officers of the said Province, by the Grants and Commissions issued in consequence thereof, have been found, upon Experience, to be inapplicable to the State and Circumstances of the said Province, the Inhabitants whereof amounted at the Conquest, to above Sixty five thousand Persons, professing the Religion of the Church of Rome.

It is hereby declared, That His Majesty’s Subjects professing the Religion of the Church of Rome, of, and in the said Province of Quebec, may have, hold, and enjoy, the free Exercise of the Religion of the Church of Rome, subject to the King’s Supremacy, declared and established by an Act made in the First Year of the Reign of Queen Elizabeth, over all the Dominions and Countries which then did, or thereafter should, belong to the Imperial Crown of this Realm; and that the Clergy of the said Church may hold, receive, and enjoy their accustomed Dues and Rights, with respect to such Persons only as shall profess the said Religion.

Provided nevertheless, That it shall be lawful for His Majesty, His Heirs or Successors, to make such Provisions out of the rest of the said accustomed Dues and Rights, for the Encouragement of the Protestant Religion, and for the Maintenance and Support of a Protestant Clergy within the said Province, as he or they shall, from Time to Time, think necessary or expedient.

And be it further enacted by the Authority aforesaid, That all His Majesty’s Canadian Subjects within the Province of Quebec, the Religious Orders and Communities only excepted, may also hold and enjoy their Property and Possessions, together with all Customs and Usages, relative thereto, and all other their Civil Rights, in as large, ample and beneficial Manner, as if the said Proclamation, Commissions, Ordinances, and other Acts and Instruments, had not been made, and as may consist with their Allegiance to His Majesty, and Subjection to the Crown and Parliament of Great Britain; and that in all Matters of Controversy relative to Property and Civil Rights, Resort shall be had to the Laws of Canada, as the Rule for the Decision of the same; and all Causes that shall hereafter be instituted in any of the Courts of Justice, to be appointed within and for the said Province by His Majesty, His Heirs and Successors, shall, with respect to such Property and Rights, be determined agreeably to the said Laws and Customs of Canada;

And whereas the Certainty and Lenity of the Criminal Law of England, and the Benefits and Advantages resulting from the Use of it, have been sensibly felt by the Inhabitants from an Experience of more than Nine Years, during which it has been uniformly administered; be it therefore further enacted by the Authority aforesaid, That the same shall continue to be administered, and shall be observed as Law, in the Province of Quebec, as well in the Description and Quality of the Offense, as in the method of Prosecution and Trial, and the Punishment and Forfeitures thereby inflicted, to the Exclusion of every other Rule of Criminal Law, or Mode of Proceeding thereon, which did or might prevail in the said Province before the Year of our Lord One thousand seven hundred and sixty four; any, Thing in this Act to the Contrary thereof in any Respect notwithstanding;

And whereas it may be necessary to ordain many Regulations, for the future Welfare and good Government of the Province of Quebec, the Occasions of which cannot now be foreseen, nor without much Delay and Inconvenience be provided for, without entrusting that Authority for a certain Time, and upon proper Restrictions to Persons resident there:

And whereas it is at present inexpedient to call an Assembly: be it therefore enacted by the Authority aforesaid, That it shall and may be lawful for His Majesty,and with the Advice of the Privy Council, to constitute and appoint a Council for the Affairs of the Province of Quebec, to consist of such Persons resident there, not exceeding Twenty-three, nor less than Seventeen, as His Majesty,shall be pleased to appoint:…which Council, so appointed and nominated, or the major Part thereof, shall have Power and Authority to make Ordinances for the Peace, Welfare, and good Government of the said Province with the Consent of His Majesty’s Governor, or, in his Absence, of the Lieutenant Governor, or Commander in Chief for the Time being.