August 1.—Arguments at this period of the war to prove the justice of our cause, or the importance of the controversy, would be useless, nay, would be insults to our understandings. But our successes in arms and in gaining the powerful alliances of foreign nations, have lulled us into a dangerous security. We neither want wisdom to conduct, nor courage to finish, what we have carried so far with unequalled reputation. But as the bravest minds are the most tender and gentle, our soft feelings have betrayed us too soon into a forgiving indolence, and led us to hope that the war may be finished without those vigorous exertions which may prove bloody to us, and must end in the total destruction of our enemies. Save Britain! has been the common cry. It was our own. The Britons have schooled us out of our error, and taught us that we must entirely put out the flame, or lose the building.

Britain hath long seen that the conquest of America, by force alone, is impracticable. She has therefore had recourse to stratagems, by which she hopes to gain an accommodation, if not a victory; an accommodation that will give such power to neutrals and Tories as will gain a slower, but not less certain, nor less fatal, victory in the end. To accomplish this she has too well succeeded in depreciating our money, by her emissaries both without and within our lines and councils. But she can never accomplish her design unless our zeal and vigor are depreciated with our money. This is now attempted by various means. Some they endeavor to crush by making rapid excursions and cruelly and totally divesting them of their property; others are stolen from their beds into captivity; others are allured by hopes and fears, to trade and parole submission. By thus gradually removing from the lines such spirits as they cannot tame, and enlarging their connections among the meaner sort, they hope gradually to make their way into the country. We are, therefore, often told by their abettors that they can go where they please, and take whom they will. One to save his house will declare, “That no rebel gun was ever fired from behind it;” another to save his person, seeks a parole, or refuses to take any active part. The calamities of war are held up in magnified prospects on the one hand, and the mild terms offered by the enemy more falsely trumpeted upon the other. The most horrid murders, and other barbarities committed by them, are attributed to accident, or the error of some irresponsible individual. And from Lord North downward, they are all declaring they do not mean to injure America, but to watch the favorable movement of the war to give the Americans peace and order. That all their barbarity in the field, the destruction of our property, and the far more cruelly slow murders of thousands in their prisons, is only designed for our good, and to prepare us for the olive branch. By such pretensions some are imposed upon, and by the same, our public danger is increased. Yet how little reason there is for the imposition, reflection will soon convince.

The death of our paper currency and the fall of Charleston (S. C.) happening near together, flushed the hopes of the British, and, in their opinions, gained them the point which Lord North deemed proper for extending the olive branch. But what was their conduct? In the south, their cruelty, and the high demands of Clinton’s proclamations, were sufficient to draw the pale ghosts from the graves of their former fears, resolved to check the tyrant or deliver themselves by an honorable death in arms. And amongst us their barbarities rose with their hopes, till they have proved to us, by the strong language of plunder, flames, and murder, that they only waited for power wholly to desolate the friends of liberty. Our dwelling-houses and temples in flames before our eyes; the aged, the widow, the fatherless, insulted, beaten, and plundered without pity, are arguments we understand and feel. And oh! that unequalled act of guilt and cruelty! We cannot forget it, nor are we willing it should be forgotten. Defended by every personal charm; protected by a complete collection of the softest and most charming virtues; guarded by a sucking infant and a large family of depending babes, and who, sitting still in her own house, might thereby claim, at least, life from the enemy in whose power she had put hers; —yet she1 falls by the deliberate aim of an instigated soldier! What then can we expect if fully in their power? Some of the enemy affect to say her death was accidental. There is sufficient proof to the contrary. But suppose some of the enemy thought so, did they show one mark of grief, pity, or humanity? Did one officer, or one soldier, protect the corpse, or save any property for the bereaved babes? Not one; General Robertson’s wagon was brought to the door, and loaded by his own servants with the beds and family goods. General Skinner2 knew the lady and her family. He had many year’s pleaded at the bar where her father was judge—long sat a fellow-member with him in the legislature; but the plunder of the house was more in his eyes than the murdered person of his old friend’s daughter. And her corpse, which was in part stripped, must have been consumed in the flames had it not been for the humanity of some persons who were not of the army.

The enemy have also insulted our understanding by assigning as a reason why they burned our houses that we fired out of them. Had it been convenient to have used our houses as forts, we should have been justified in it, and could the enemy have fired them at that time, they would also have been justified. But after they were not, and could not again be used for that purpose, the reason for burning ceases. But the whole story is false in fact. We know but of one house out of which a gun was fired at the Connecticut Farms or Springfield. If there are any more instances they are very few. And did not the enemy avail themselves of our houses in Elizabethtown while they lay in it, and fire upon us out of the windows?

From every view, then, of the enemy’s conduct, it is evident we have nothing to expect from them but the effects of pride and malice heightened by resistance. Many may now be nattered by them, and a few villains may be finally protected to answer their purposes. But if they could conquer this country for the present, they could not hold the conquest without crushing us. That necessity will favor their dispositions to prosecute the object. As a warning, we give an extract, which is genuine, from the Journal of a principal officer of their own when speaking of a number of persons of considerable note who came into General Howe, from Philadelphia. He says, “They are all Very politely received for the present, but their several characters are particularly known to the general, and a day of reckoning is to come hereafter.”

In these circumstances, Divine Providence is rousing to action by the most favorable prospects, our allies are gaining the superiority by sea in the different quarters of the globe, and at the same time have sent a very powerful aid to us. The remains of this campaign are big with important events. The danger and expense of one liberal supply, of one vigorous effort, will be much less than a lingering war. While in the one case our success is morally certain, and in the other doubtful. Rouse then all at once to action, and flash the final shock upon all those who disgrace humanity. Nay, humanity cannot live till they are dead. Give the necessary supplies, with your personal services. We shall either gain an honored death or secure a fine country in circumstances more advantageous to posterity than our fathers found it at first, even if we lose our movable property. Let us free ourselves from the hope of reunion with such men. 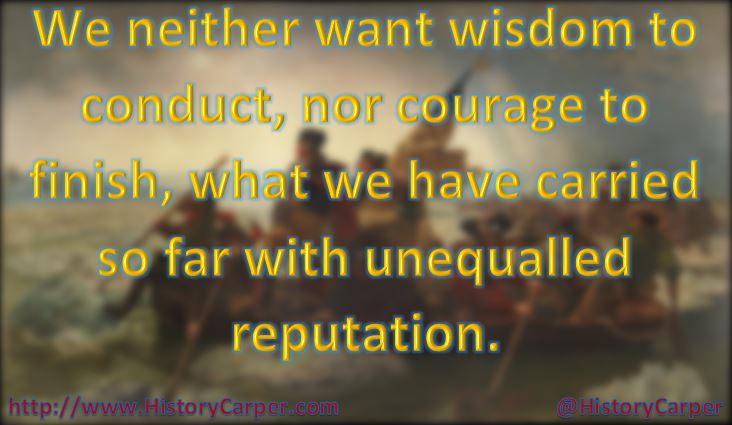 The Tories are now returning to their original—horse thieves, night robbers, and murderers. They are banding themselves together for the execution of their plan. Rise, then, to extirpate those wretches, root and branch, from this continent, which was given to freemen! The late militia law is favorable beyond others to us who only deserve the country because we fight for it. And as the Government is fully in our own power, we need nothing but watchful zeal to have all our own. Look back on what we have done and gained, and also consider what we have at stake. Let not the want of a last brave effort sacrifice the whole. Do not so much as please the tories’ ears by a groan under the complicated difficulties we have to struggle with. The greater they are, the more honor we shall gain by cheerfully surmounting them. In a future day we shall enjoy pleasing reflections, and feel rich, in proportion to the losses we have sustained in preserving our country. He that has lost nothing will not dare to be seen amongst freemen. Let affection, strengthened by suffering, fears roused by dangers, and fortitude supported by the greatest prospects, unite and invigorate the grand struggle, that we may soon be in-full liberty and peace, each enjoying all that is contained in the character of A Citizen.3