December 30.—Timothy Standfast, in the Virginia Gazette of to-day, makes the following appeal to the people of Virginia:—

Friends, Countrymen, and Brethren:—When we made our first efforts to rescue the liberties of America from the fetters of arbitrary power, the Virginians stood foremost in the exercise of public virtue. The love of our country seemed to predominate over every other passion, and military glory alone was the object that fired the pride of our ambition, wisdom presided over our measures, and the stamp of policy marked the determination of our councils. Difficulties at length grew upon us, and we have learned to forget our duty; a strange degeneracy of manners, and a total subversion of principles, has almost obfuscated the radiency of our hopes. For God’s sake, my countrymen, rouse from your lethargy, look into consequences, and return to your pristine vigor. Pause but for a moment, and seriously examine into the motives which influenced your former conduct, and the reasons that directed and governed your latter. Have you already forgotten that we are struggling for the inestimable blessings of liberty, and that we are setting up a new empire in opposition to the most imperious power upon earth? Have you forgotten the insults that were offered us by Great Britain, and the solemn promise we made to each other when we appealed to the sword for justice, “that we would die or be free in the struggle”? Can you suffer reflection to have the exercise of deliberate reason and not feel a virtuous indignation at the ravages committed by the enemy on our land; the cruelties inflicted upon our inhabitants in their solitary huts, and the barbarities practised upon our soldiers while they were fighting for our safety, and bleeding for our property? I say, can these things be reflected on and not agitate the feelings of every generous mind? Gratitude and duty ought to stimulate our actions to the accomplishment of that end which involves in it the happiness of every persecuted son of liberty. I mean the independence of America.

There is a dignity in the soul of man, which, when interwoven with the interest of his country, makes him act as if he was immortal; every power of his mind seems heightened to a peculiar greatness, and all his actions blaze with the refulgency of magnanimity and patriotism. The moment is near at hand when we shall all be tried to the very quick, and if a manly and virtuous spirit is not immediately cherished, the bayonet will be in the bowels of our country before we shall have power to mark the limits of its vengeance. From the best and most authentic accounts we are assured that the greater part of the British force will be turned the next campaign against Virginia, and that every preparation is now on foot to make the conquest of it (as they think) certain and inevitable. Great God! what a picture of distress would a conquest of this country present to a sensible mind! Let us suppose, by way of trying our feelings, that they should succeed, (detested thought! were it possible I should weep over it,) what would be our hopes and expectations? A life of infamy dragged out in chains, and rendered forever miserable by severe and bitter reflections, the epithet of rebel eternally crammed down our throats by some haughty Scotchman, or imperious Briton, a confiscation of property, the pains of bondage, and the disgrace of the gibbet to ornament the black catalogue of consequences, would attend our downfall. Virginians, think of the danger that threatens a bleeding country! Awake to public virtue, and sleep no more in the arms of indifference and supineness. 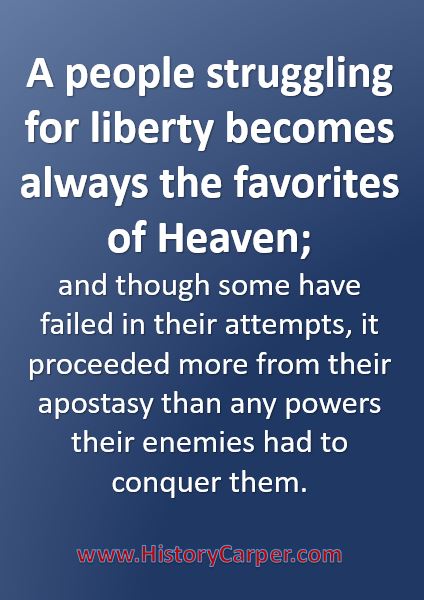 A people struggling for liberty becomes always the favorites of Heaven; and though some have failed in their attempts, it proceeded more from their apostasy than any powers their enemies had to conquer them. The Dutch persevered through a war of twenty years and upwards, maintained their independence against the power of Spain, and broke the chain of tyranny that had for such a length of time fettered them to the block of oppression. The people of Switzerland, possessed of an elevated notion of liberty, contended for their rights, and fixed the sovereignty of their independence against every attempt that could be made to subdue them. If we look back into more ancient times, we shall view the free States of Greece rising to eminence and glory through a cloud of difficulties. The Persian army, terrible in numbers, seemed to fix their total ruin, but fate itself could not intimidate or alarm them; the brave Leonidas made a noble sacrifice of himself and three hundred of his countrymen at Thermopylae, to convince the haughty Persians that men determined to be free would be so, and although the force of Xerxes appeared sufficient to conquer and subdue the world, yet such was the impression which the valor of the Grecians made upon him, that he abandoned the expedition. In Rome, patriotic zeal and a flame of liberty directed the actions of some of her citizens to such deeds of glory, that their names have been handed down from age to age with all the gilded ornaments of immortal fame.

We are now in a situation that has fixed upon us the attention of the whole world; expectation sets Argus-like with a hundred eyes to view our actions, and every misfortune proclaims aloud any neglect that must stain us with dishonor.

Then, my countrymen, let us learn to be great by the example that is gone before us; let us catch from the Dutch, the Swiss, the Grecian, and the Roman spirit, a spark of each excelling virtue, and compound a character of fortitude, resolution, firmness, and magnanimity, to stem the torrent of our approaching danger and assert a freedom which we dare maintain.1