The battle of Saratoga is included by Sir Edward Creasy among his fifteen decisive battles which have, by their result, affected the history of the world. It is true that the American Revolution was saved by Washington in the remarkable Princeton and Trenton campaign, but it is equally true that the surrender of Burgoyne at Saratoga, in the following autumn, turned the scale decisively in favor of the colonists by the impression which it made in Europe. It was the destruction of Burgoyne’s army which determined France to aid the Americans against England. Hence came the French alliance, the French troops, and, what was of far more importance, a French fleet by which Washington was finally able to get control of the sea, and in this way cut off Cornwallis at Yorktown and bring the Revolution to a successful close. That which led, however, more directly than anything else to the final surrender at Saratoga was the fight at Bennington, by which Burgoyne’s army was severely crippled and weakened, and by which also, the hardy militia of the North eastern States were led to turn out in large numbers and join the army of Gates.

The English ministry had built great hopes upon Burgoyne’s expedition, and neither expense nor effort had been spared to make it successful. He was amply furnished with money and supplies as well as with English and German troops, the latter of whom were bought from their wretched little princes by the payment of generous subsidies. With an admirably equipped army of over seven thousand men, and accompanied by a large force of Indian allies, Burgoyne had started in May, 1777, from Canada. His plan was to make his way by the lakes to the head waters of the Hudson, and thence southward along the river to New York, where he was to unite with Sir William Howe and the main army; in this way cutting the colonies in two, and separating New England from the rest of the country.

At first all went well. The Americans were pushed back from their posts on the lakes, and by the end of July Burgoyne was at the head waters of the Hudson. He had already sent out a force, under St. Leger, to take possession of the valley of the Mohawk–an expedition which finally resulted in the defeat of the British by Herkimer, and the capture of Fort Stanwix. To aid St. Leger by a diversion, and also to capture certain magazines which were reported to be at Bennington, Burgoyne sent another expedition to the eastward. This force consisted of about five hundred and fifty white troops, chiefly Hessians, and one hundred and fifty Indians, all under the command of Colonel Baum. They were within four miles of Bennington on August 13, 1777, and encamped on a hill just within the boundaries of the State of New York. The news of the advance of Burgoyne had already roused the people of New York and New Hampshire, and the legislature of the latter State had ordered General Stark with a brigade of militia to stop the progress of the enemy on the western frontier. Stark raised his standard at Charlestown on the Connecticut River, and the militia poured into his camp. Disregarding Schuyler’s orders to join the main American army, which was falling back before Burgoyne, Stark, as soon as he heard of the expedition against Bennington, marched at once to meet Baum. He was within a mile of the British camp on August 14, and vainly endeavored to draw Baum into action. On the 15th it rained heavily, and the British forces occupied the time in intrenching themselves strongly upon the hill which they held. Baum meantime had already sent to Burgoyne for reinforcements, and Burgoyne had detached Colonel Breymann with over six hundred regular troops to go to Baum’s assistance. On the 16th the weather cleared, and Stark, who had been reinforced by militia from western Massachusetts, determined to attack.

Early in the day he sent men, under Nichols and Herrick, to get into the rear of Baum’s position. The German officer, ignorant of the country and of the nature of the warfare in which he was engaged, noticed small bodies of men in their shirtsleeves, and carrying guns without bayonets, making their way to the rear of his intrenchments. With singular stupidity he concluded that they were Tory inhabitants of the country who were coming to his assistance, and made no attempt to stop them. In this way Stark was enabled to mass about five hundred men in the rear of the enemy’s position. Distracting the attention of the British by a feint, Stark also moved about two hundred men to the right, and having thus brought his forces into position he ordered a general assault, and the Americans proceeded to storm the British intrenchments on every side. The fight was a very hot one, and lasted some two hours. The Indians, at the beginning of the action, slipped away between the American detachments, but the British and German regulars stubbornly stood their ground. It is difficult to get at the exact numbers of the American troops, but Stark seems to have had between fifteen hundred and two thousand militia. He thus outnumbered his enemy nearly three to one, but his men were merely country militia, farmers of the New England States, very imperfectly disciplined, and armed only with muskets and fowling-pieces, without bayonets or side-arms. On the other side Baum had the most highly disciplined troops of England and Germany under his command, well armed and equipped, and he was moreover strongly intrenched with artillery well placed behind the breastworks. The advantage in the fight should have been clearly with Baum and his regulars, who merely had to hold an intrenched hill.

It was not a battle in which either military strategy or a scientific management of troops was displayed. All that Stark did was to place his men so that they could attack the enemy’s position on every side, and then the Americans went at it, firing as they pressed on. The British and Germans stood their ground stubbornly, while the New England farmers rushed up to within eight yards of the cannon, and picked off the men who manned the guns. Stark himself was in the midst of the fray, fighting with his soldiers, and came out of the conflict so blackened with powder and smoke that he could hardly be recognized. One desperate assault succeeded another, while the firing on both sides was so incessant as to make, in Stark’s own words, a “continuous roar.” At the end of two hours the Americans finally swarmed over the intrenchments, beating down the soldiers with their clubbed muskets. Baum ordered his infantry with the bayonet and the dragoons with their sabers to force their way through, but the Americans repulsed this final charge, and Baum himself fell mortally wounded. All was then over, and the British forces surrendered.

It was only just in time, for Breymann, who had taken thirty hours to march some twenty-four miles, came up just after Baum’s men had laid down their arms. It seemed for a moment as if all that had been gained might be lost. The Americans, attacked by this fresh foe, wavered; but Stark rallied his line, and putting in Warner, with one hundred and fifty Vermont men who had just come on the field, stopped Breymann’s advance, and finally forced him to retreat with a loss of nearly one half his men. The Americans lost in killed and wounded some seventy men, and the Germans and British about twice as many, but the Americans took about seven hundred prisoners, and completely wrecked the forces of Baum and Breymann.

The blow was a severe one, and Burgoyne’s army never recovered from it. Not only had he lost nearly a thousand of his best troops, besides cannon, arms, and munitions of war, but the defeat affected the spirits of his army and destroyed his hold over his Indian allies, who began to desert in large numbers. Bennington, in fact, was one of the most important fights of the Revolution, contributing as it did so largely to the final surrender of Burgoyne’s whole army at Saratoga, and the utter ruin of the British invasion from the North. It is also interesting as an extremely gallant bit of fighting. As has been said, there was no strategy displayed, and there were no military operations of the higher kind. There stood the enemy strongly intrenched on a hill, and Stark, calling his undisciplined levies about him, went at them. He himself was a man of the highest courage and a reckless fighter. It was Stark who held the railfence at Bunker Hill, and who led the van when Sullivan’s division poured into Trenton from the river road. He was admirably adapted for the precise work which was necessary at Bennington, and he and his men fought well their hand-to-hand fight on that hot August day, and carried the intrenchments filled with regular troops and defended by artillery. It was a daring feat of arms, as well as a battle which had an important effect upon the course of history and upon the fate of the British empire in America. 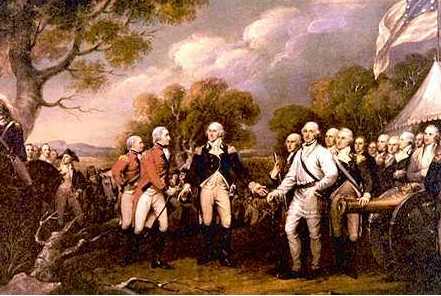