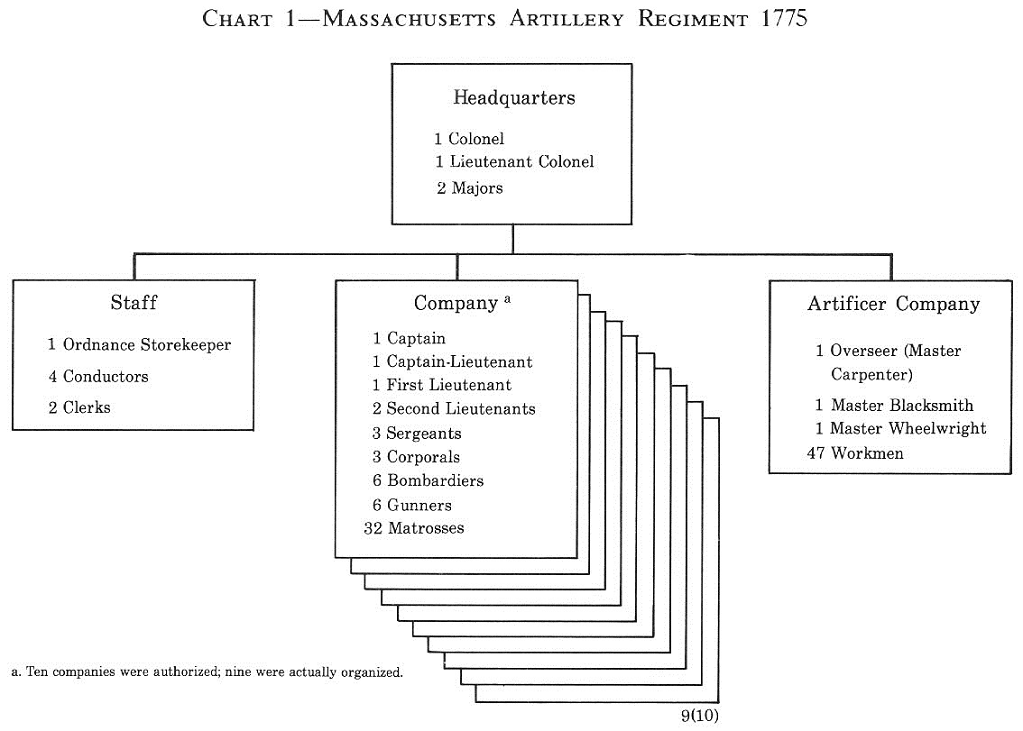 later it rescinded that organization and sent a committee to confer with Richard Gridley on the propriety of organizing a full artillery regiment. Gridley, hero of the 1745 capture of Louisbourg, was the colony’s leading expert on artillery. Following the talks, on 12 May the Provincial Congress authorized a ten-company regiment. (Chart 1) Four days later it gave Gridley the command.

The regiment formed in June. Neither Gridley nor William Burbeck, his assistant, could concentrate on it since they had also been appointed the colony’s two engineers on 26 April. In June the Committee of Safety added a logistical staff and an organic company of artificers (skilled workmen) to do maintenance. The important post of ordnance storekeeper went to Ezekiel Cheever. The company officers came largely from the several Boston militia artillery companies, particularly Adino Paddock’s which had received extensive training from British artillerymen in the 1760’s and was composed mostly of skilled artisans and Sons of Liberty. Two of its members, John Crane and Ebenezer Stevens, had moved to Providence, Rhode Island, in 1774 after the closing of the port of Boston. Their close ties enabled the Rhode Island artillerymen to merge easily with the regiment in 1776.17

In spite of careful preparations, Massachusetts entered the war in a state of chaos. The Provincial Congress and the Committee of Safety frequently found themselves working at cross-purposes. Confusion over the size and configuration of the army created duplication of effort, and prospective officers were recruited under a variety of authorities. The minutemen and other militia who had responded to Lexington by

15
besieging Boston, moreover, were not prepared to remain in the field for an extended period, although later arrivals were more inclined to serve a full term (until 31 December).

Order began to emerge in May when formats for commissions and oaths were codified. Mustermasters were appointed to examine enlistment rolls at Cambridge and Roxbury so that the Committee of Safety could certify officers for commissioning. Regiments emerged with a geographic basis, drawing their precedence from that of the militia which furnished the majority of their men. Since all commissions were dated 19 May 1775, the touchy matter of seniority remained to be settled later. By the end of June twenty-six regiments had been certified, plus part of a regiment whose status as a Massachusetts or New Hampshire unit was unresolved.

During early June 1775, the Massachusetts army achieved a relatively final form. The Provincial Congress decided on 13 June to retain in service a force of one artillery and twenty-three infantry regiments. This limit was altered ten days later when the raising of troops specifically for coastal defense released Edmund Phinney’s Cumberland County regiment from that mission to join the army. The Congress also resolved the status of the generals. Ward retained the overall command he had exercised since the outbreak of hostilities. John Whitcomb, William Heath, and Ebenezer Frye were designated major generals.18

Formation of a New England Army
With remarkable speed, committees of correspondence spread the traumatic news of Lexington and Concord beyond the borders of Massachusetts. By 24 April New York City had the details and Philadelphia had them by the next day. Savannah, the city farthest from the scene of the engagement, received the news on 10 May.19 Massachusetts’ call for a joint army of observation was answered by the three other New England colonies—New Hampshire, Rhode Island, and Connecticut. Each responded in its own way. Within two months three small armies joined the Massachusetts troops at Boston, and a council of war began strategic coordination. This regional force paved the way for the creation of a national institution, the Continental Army.

New Hampshiremen responded as individuals and in small groups to the news of Lexington. On 25 April, anticipating formal aid from New Hampshire, the Massachusetts Committee of Safety directed Paul Dudley Sargent of Hillsborough County to raise a regiment from these individuals.20 Four days earlier the New Hampshire Provincial Congress had convened in emergency session. After considering a copy of Massachusetts’ plan for a New England army, the New Hampshire body sent three of its members to confer with the Massachusetts Provincial Congress, but deferred further action until it could mobilize public support and make adequate financial plans.21

16
On 18 May the full Provincial Congress resolved to raise men “to join in the common cause of defending our just rights and liberties.” Legislation on 20 May created a Committee of Safety and authorized a 2,000-man quota for the New England army. This figure included those New Hampshiremen already in service at Boston. The initial plan called for regiments organized on the same pattern as those in Massachusetts, but two days later, on 22 May, the Congress adopted a more specific plan. (See Chart 1.) It created three regiments and dispatched two officials to Cambridge to muster the volunteers who had gone to Massachusetts as one of those regiments. The volunteers had already elected John Stark, a veteran of Rogers’ Rangers, as their colonel.

On 23 May the Provincial Congress appointed Nathaniel Folsom as the general officer to command the colony’s forces, and the Committee of Safety began to nominate officers for the three regiments. On 24 May Enoch Poor of Exeter received command of the second of the regiments with an order to organize it immediately. On 1 June the congress appointed the officers of the 3d New Hampshire Regiment, the command going to James Reed of Fitzwilliam. Reed raised it in Strafford and Rockingham counties. Two days later the congress designated the regiment at Boston the 1st, or “eldest,” Regiment, and confirmed Stark and its other field officers.

Folsom initially received the rank of brigadier general with duties similar to those of such officers in Massachusetts, except that he had no regimental command. On 6 June the Provincial Congress reaffirmed his authority as the commanding general, under General Ward, of all New Hampshire forces, and at the end of the month it promoted him to major general. Jealousy by the volunteers at Boston limited his authority for a time. When Reed assembled his 3d New Hampshire Regiment at Boston on 14 June, he received two of Stark’s surplus companies to round out the unit. Poor’s 2d New Hampshire Regiment was detained to defend the colony from possible British attack, but it was ordered to Cambridge on 18 June. Its last company arrived in early August. Although Folsom had wanted an artillery company to support his regiments, New Hampshire had no officers qualified to command one. The best the Provincial Congress could do was to send artillery pieces for the Massachusetts men to use.

Meeting in emergency session in response to the news of Lexington, the Rhode Island Assembly on 25 April decided to raise 1,500 men “properly armed and disciplined, to continue in this Colony, as an Army of Observation; to repel any insults or violence that may be offered to the inhabitants; and also, if it be necessary for the safety and preservation of any of the Colonies, that they be ordered to march out of this Colony, and join and cooperate with the Forces of our neighbouring Colonies.”22 It deferred substantive action until the regular May session. In the interim the commander of the Providence County militia brigade offered Massachusetts the services of his three battalions; other individuals went off to Boston as volunteers.

At the regular May session, the Rhode Island Assembly created an “Army of Observation” and a Committee of Safety. Because Governor Joseph Wanton remained loyal to the Crown, the colony’s secretary signed the commissions. Deputy Governor Nicholas Cooke soon replaced Wanton. Rhode Island organized its contingent as a balanced brigade under Brig. Gen. Nathanael Greene, thus adopting a different ap-

17
proach than that of the other New England colonies. (See Chart 1.) Greene’s staff included a brigade adjutant and a brigade commissary responsible for logistics. The troops formed three regiments (two with eight companies and one with seven) and a company of artillery.23 Greene, Cooke, and the Committee of Safety arranged the officers; since all commissions were dated 8 May, seniority was resolved by drawing lots. The three regiments rotated posts of honor to avoid establishing a system of precedence. One regiment was raised in Bristol and Newport Counties by Thomas Church; another was raised by Daniel Hitchcock in Providence County. A business associate of Greene’s, James Mitchell Varnum, was given command of the regiment from King’s and Kent counties, while John Crane, formerly of Boston, became captain of the artillery company.

Companies left for Boston as quickly as possible. Hitchcock’s and Church’s regiments had assembled there by 4 June, the date that Greene opened his headquarters. The artillery company, armed with four field pieces and escorting a dozen heavy guns, also arrived in early June. Varnum’s regiment arrived several weeks later. The Rhode Island Assembly reconvened on 12 June and remained in session until 10 July. During this period it settled various logistical and disciplinary matters and added a secretary, a baker, and a chaplain to the brigade’s staff. It also raised six new companies, two for each regiment. Greene was given the power, in consultation with the field officers, to fill vacancies, and he was placed under the “command and direction” of the Commander in Chief of the “combined American army” in Massachusetts.24

On 21 April representatives from Massachusetts met with the Connecticut Committee of Correspondence in the home of Governor Jonathan Trumbull at Lebanon. Trumbull sent his son David to inform Massachusetts that a special session of the Connecticut assembly would meet as soon as possible. While some Connecticut militia units marched to Boston on hearing of Lexington, most followed the advice of the governor to wait until the assembly could act. The wisdom of this course was confirmed by news that although Israel Putnam had asserted a loose hegemony over the volunteers, a formal command structure was needed before they would become effective.25

The special session convened at Hartford on 26 April, and the next day the Connecticut Assembly ordered that six regiments be raised, each containing ten companies. (See Chart 1.) Officers were appointed on 28 April and arranged on 1 May. At the time the assembly believed that these 6,000 men represented 25 percent of the colony’s militia strength; they were obligated to serve until 10 December. The companies were apportioned among the several counties according to population. Connecticut’s regimental structure followed a somewhat older model than that chosen by the other colonies and was considerably larger. Connecticut placed generals in direct command of regiments, as Massachusetts did, but followed Rhode Island’s example in having field officers command companies. This left generals filling three roles at the same