The Continental Regiments of 1776:
Boston and Quebec

In 1775 the four New England colonies had raised their own armies in the aftermath of Lexington, and New York followed suit with encouragement from the Continental Congress. Lack of centralized direction allowed each colony to base its regimental organization on its own particular experience in the earlier Imperial Wars. Congress accepted responsibility for the troops in June when it established the Continental Army. The enlistments of most of the soldiers composing the field armies besieging the British strongholds of Boston and Quebec expired on the last day of December. Congress, George Washington, and his senior officers used the reenlistment of those troops as a vehicle for transforming the Continental Army into a unified national force. In the process they emphasized lessons derived from the French and Indian War.

Washington’s Unified Reorganization
In his first week at Boston in 1775 George Washington had identified several organizational problems, and his earliest letters to Congress suggested solutions. During the summer individual delegates visited the Main Army, and in the fall a special congressional committee held extensive discussions with the military leaders and with representatives of the New England governments. Based on that committee’s report and Washington’s recommendations, a number of major reforms were introduced for 1776.

Washington’s first concern was the weakness of so many of the Massachusetts regiments. Calling out militia to supplement the Main Army did not appear to be a viable policy. The generals unanimously agreed “that no Dependence can be put on the Militia for a continuance in Camp, or Regularity and Discipline during the short time they may stay.”1 Washington attempted to fill the strength deficiencies locally, but he privately doubted that he would succeed, and as early as 10 July he suggested to Congress that it recruit in areas outside New England. In time Washington decided that some incompetent officers also were undermining the quality of his army. He blamed this problem on defects in the methods of selecting officers used by Massachusetts and urged Congress to retain sole control over commissions. This policy would have the additional advantage of broadening the geographical base of the officer corps. In addition, he complained that the differences in the New England regimental organizations hampered efficient operations.2

1. Fitzpatrick, Writings, 3:327.
2. Ibid., pp. 320-31, 390-400, 433, 450-54, 456-57, 505-13. On 10 July, the date Washington submitted his first report to Congress, he began a policy of sending personal letters to individual members of Congress. He used these letters to express opinions which would have been impolitic in official dispatches and to solicit the recipients to act as his agents in securing legislation he desired.

46
During Congress’ August recess several members traveled to Massachusetts for a personal view of Washington’s army. After Congress reconvened, the delegates decided that to begin a reorganization now would only cause needless discord since enlistments would expire before any changes could become effective. Promising to make improvements in the future, they requested Washington to send specific proposals. On 29 September Congress established a special committee to confer with Washington, his senior advisers, and officials of the New England governments. None of the committee members (Thomas Lynch, Benjamin Harrison, and Benjamin Franklin) came from New England, but all favored a vigorous military effort. This fact-finding committee arrived at headquarters on 15 October with instructions to persuade the Connecticut troops to remain until 31 December rather than 10 December as their enlistments specified. They also conveyed a message that Congress hoped that Washington could attack Boston before the end of the year. The committee’s basic task, however, was to prepare a report for Congress on specific measures needed to reorganize the Continental Army, including Schuyler’s army, for an additional year’s service. Committee members were instructed to discuss the projected total cost, the rates of pay and the size of the ration, the need for additional regulations, and the implementation of a uniform regimental organization; they were also to recommend a plan for raising troops that would provide for the retention of as many veteran officers and men as possible.3

Washington prepared for these meetings by collecting written opinions from his generals and the heads of the staff departments; he also held a Council of War on 8 October. The consensus reached at this meeting reflected Washington’s personal views. The officers wanted the new Main Army to consist of at least 20,000 men organized in 26 standard infantry regiments and separate units of riflemen and artillery. Each regiment was to be reduced from ten to eight companies. Each company was to have a captain, 2 lieutenants, an ensign, 4 sergeants, 4 corporals, a fifer, a drummer, and 76 privates. Each regiment would then have a total strength of 728 officers and men. Eight companies lent themselves to better tactical deployment than ten companies in linear warfare. The new organizations would have stronger companies than those of most of the existing regiments and would save money. The generals avoided the question of how to select the officers because of its “delicacy.”4

These findings and the written staff reports formed the basis for frank discussions with the congressional committee and New England civil leaders from 18 to 24 October. The committee promised Washington that his Main Army would be reinforced before it was made responsible for the defense of New York City, and the committee (exceeding its authority) allowed him to begin reenlisting his men, for a year ending on 31 December 1776. Congress began debating the committee’s report on 2 November and completed the reorganization in a month. It was clearly impressed by the unanimity reported by the committee, and it approved the recommendations of 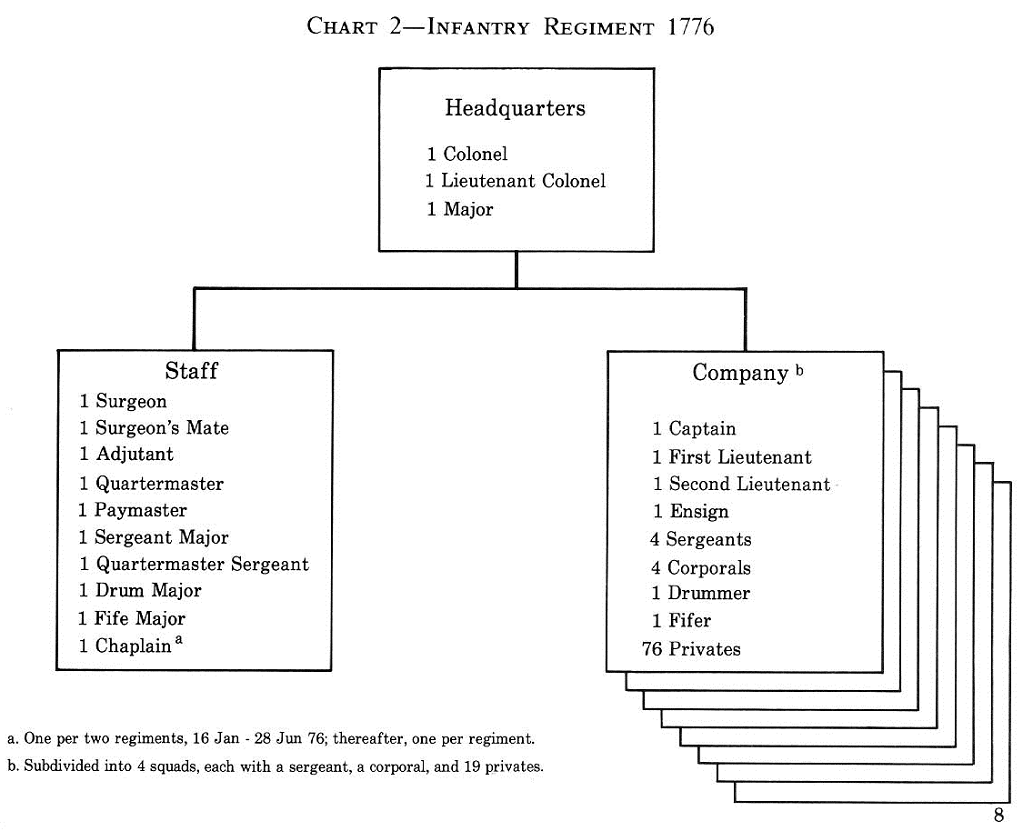 Washington and the other military leaders with little change. The committee thus served as the vehicle for transmitting the Main Army’s ideas to Congress.5

On 4 November Congress approved the reorganization of the infantry into 26 regiments, each with the structure recommended by the generals. (Chart 2) It also accepted their plan for implementing the reorganization.6 Congress ordered that uniforms were to include brown coats with different colored facings (collar, lapels, cuffs, and inside lining of the coattails) to distinguish the regiments, a system borrowed from the red-coated British Army. Each regiment contained 3 field officers (who could not be generals or captains), a small staff, and 8 companies. Each company had 4 officers and 2 musicians, plus 8 noncommissioned officers and 76 privates evenly divided into 4 squads.7 At full strength the regiment deployed 640 privates and corporals—the soldiers who stood in the ranks with muskets—or 88 percent of its total of 728. The 32 officers and 32 sergeants provided a favorable ratio of one supervisor to ten rank and file for maintaining company-level control.

A comparison of this Continental regiment with its British counterpart reveals 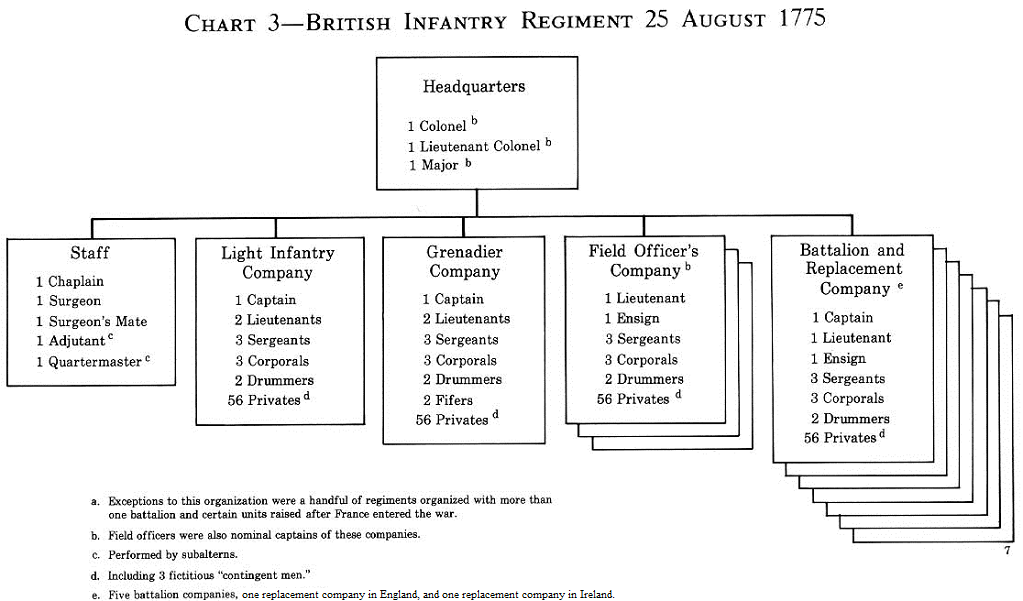 some basic philosophical differences and sheds light on their relative strengths and weaknesses, although it must be remembered that both sides habitually operated with units well below full strength. The basic single-battalion British infantry regiment (Chart 3) was far less formidable than the Continental regiment despite an aggregate strength of 809. It also had three field officers on its rolls, but the colonel was a titular officer, the lieutenant colonel often served as a brigadier, and he or the major were frequently detailed to special duties. Staff organization was identical to that of the Continental regiment, but British chaplains and medical personnel were absent to a greater extent. Each British regiment had 12 companies, but 2 were recruiting depots (one each in England and Ireland). Two were “flank” companies: the grenadier company, composed of the largest men, served as the heavy strike force on the right (honor) flank of the regiment, while the light infantry, selected for agility, held the left flank or served as skirmishers. By the era of the Revolution, however, the British normally detached the flank companies from their regiments and formed provisional grenadier and light infantry battalions from them. This practice deprived a regiment of its best men; in addition, the remaining line, or “battalion companies,” had to supply replacements to the flank companies.8

The British companies all had the same basic organization: 3 officers, 3 sergeants, 3 corporals, 2 drummers (actually a fifer and drummer), and 56 privates. Both flank companies had two lieutenants rather than a lieutenant and an ensign. Three of the line companies lacked a captain since the field officers commanding them nominally

49
were also captains. The grenadier company had two additional fifers, slots used for the regimental fife and drum majors. Three of the privates in every company were “contingent men,” fictitious names carried on the regiment’s rolls. Their pay was used as a special regimental fund for the care of widows and orphans. These exceptions plus normal detachments and details greatly reduced the fighting strength of the regiment. A British lieutenant colonel could deploy a maximum of only 514 men, 63 percent of the theoretical total; only 448 were musketmen. Such full-strength figures, moreover, were rarely seen during the Revolution.

Although a common heritage produced many apparent similarities in the eight-company battle formations of the Continental and British battalions, Washington planned to make his much more powerful. The American battalion contained nearly 50 percent more musketmen (640 to 448) without sacrificing any control. The British had a similar theoretical ratio of roughly one supervisor (21 company officers and 24 sergeants) for every ten fighters, but Washington normally enjoyed a higher ratio of officers to men than his opponents because so many British officers were absent.9 Shortages of enlisted men plagued both armies, but the additional problems of transatlantic communications made the procurement of replacements particularly troublesome for the British.10

The differences in British and American regimental organizations reflected deliberate doctrinal differences. Britain, influenced by Frederick the Great and its own experience in the Seven Years’ War, produced a regiment tailored to formal European battle. It deployed its battalion companies in three ranks to achieve the density needed for a bayonet charge.11 The Continentals turned instead to their colonial tradition of aimed fire and to the lessons of the French and Indian War for inspiration. They adopted a formation using only two ranks, with a frontage more than twice the size of that of a British battalion (320 men to 150). In the American volley all 640 shots counted. The fire of a third rank was so ineffective that a British volley only hoped for 300 shots.

The regimental staff expanded during 1776. Original plans assumed that it would consist of a chaplain, a surgeon, and a surgeon’s mate, with the functions of adjutant and quartermaster being additional duties for subalterns. Congress formally approved the surgeon’s position on 8 December 1775 and the mate’s on 30 March 1776. The hospital staff screened all candidates since Washington considered it “a matter of too much importance, to intrust the Wounds and Lives of Officers, and Soldiers, to unskilled Surgeons.”12 At Washington’s request Congress added five specialists on 16 July.