Washington wished to attract more capable chaplains by improving their status. He recommended raising salaries and assigning each chaplain to minister to two regiments, and Congress approved. When this arrangement proved unmanageable during the course of the year, Congress authorized a chaplain for each regiment. The deteriorating battlefield situation, however, limited actual appointments. The chaplains’ duties remained the same throughout the war: providing moral, spiritual, and political guidance, plus assisting the surgeon. The chaplains corps was notable for its freedom from denominational friction. A Roman Catholic priest, for example, became an Army chaplain; this appointment would have been unthinkable in 1774.14

While Congress dealt with the new regimental organization and related matters, Washington began the reorganization of the Main Army. Acting on preliminary instructions from the congressional committee, he surveyed his officers to find out how many planned to remain in service. By 1 November Adjutant General Gates had compiled preliminary statistics. (Table 2) The overall response was encouraging: 751 of the authorized 1,465 officers intended to stay. Among 1,286 combat officers, 641 (78 field grade and 563 company grade) made positive responses. Twenty-six regiments required 78 field officers and 832 company officers. Thus only minor adjustments were necessary to account for a full complement of field officers. Massachusetts had an excess of candidates, while the other colonies had some shortages. In terms of company officers, the creation of a second lieutenant position caused some problems since most colonies had not had this rank in 1775. At the same time, there was a surplus of captains.15

Washington and his generals selected the field officers on 2 November. Because a more detailed evaluation was required to choose the remaining officers, those selections were delegated to groups composed of the brigadier general and field officers of each brigade. Washington retained the right to review all arrangements. To make up the shortages in the company-officer ranks, he instructed the groups to consider officers who had originally indicated that they would not remain but who had since changed their minds, officers who had been absent from camp at the time of the survey, and qualified sergeants. Washington reluctantly abandoned his desire to mingle officers from all colonies in each regiment when the idea proved extremely unpopular. The arrangements were gradually completed, and the officers began reenlisting men on 13 November. Recruiting parties, promises of liberal furloughs, and elimination of arrears in pay all were employed in an unsuccessful effort to fill the regiments before 1 January.16 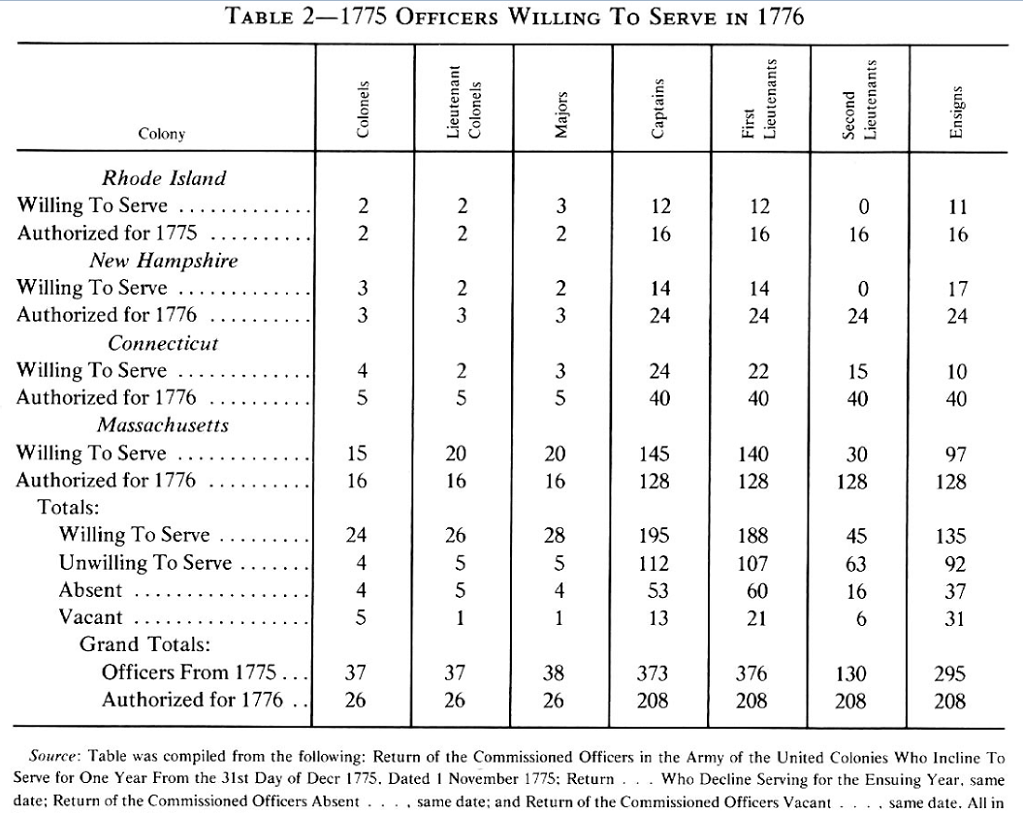 Washington implemented the reorganization of the Main Army on 1 January 1776. General Orders announced:

This day giving commencement to the new army, which, in every point of View is entirely Continental, . . . His Excellency hopes that the Importance of the great Cause we are engaged in, will be deeply impressed upon every Man’s mind, and wishes it to be considered, that an Army without Order, Regularity and Discipline, is no better than a Commission’d Mob.17

Each infantry regiment was assigned a numerical designation based on its colonel’s relative seniority. New Hampshire’s three regiments of 1775 under Cols. James Reed, John Stark, and Enoch Poor, for example, became the 2d, 5th, and 8th Continental Regiments with only minor modifications. Promotions and some new appointments filled the officer ranks; the colony’s support, such as exempting soldiers from the poll tax, helped recruiting.18

Rhode Island retained a quota of 1,500 men, organized into two instead of three regiments. Brig. Gen. Nathanael Greene, working closely with his brother Jacob (a member of the colony’s Committee of Safety) and Governor Nicholas Cooke, used the reduction as an opportunity to purge the officer corps. James Varnum’s and Daniel

JAMES MITCHELL VARNUM (1748 – 89), a close friend of General Greene, raised a regiment in Rhode Island in 1775 and later commanded the Rhode Island Brigade and served in the Continental Congress. (Portrait by Charles Willson Peale.)

Hitchcock’s regiments were retained as the 9th and 11th Continental Regiments. Thomas Church’s was disbanded because Greene judged its officers poor disciplinarians; a handful of the latter, such as Maj. Henry Sherburne, were used to fill the two Continental regiments or were placed in units from other colonies.19

Connecticut had sent five regiments to Boston in 1775 and three to Canada. Since the colony’s quota for 1776 was five regiments, the cadres at Boston were used to form the 10th, 17th, 19th, 20th, and 22d Continental Regiments. All had slightly modified geographical bases. Some sergeants became ensigns, and several other individuals, particularly veterans of the four companies that had been sent to Boston when their regiments went to Canada, received promotions to round out the officer complemented

Massachusetts had particular problems in making the transition. Washington assigned it a quota of 11,648 men, about 2,000 less than the colony had set for itself in 1775, to be divided into 16 regiments instead of the existing 27. Officers were selected On the basis of competence and in proportion to the number of men their 1775 regiments furnished. Where a regiment could be reorganized from an existing one, it was held together. In most cases, however, a single regiment could not furnish eight full companies; therefore, companies from several regiments were merged, with the field officer assignments reflecting the proportions from each. Massachusetts furnished the 3d, 4th, 6th, 7th, 12th, 13th, 14th, 15th, 16th, 18th, 21st, 23d, 24th, 25th, 26th, and 27th Continental Regiments.

The reorganization involved New England’s artillerymen as well as its infantry, combining Richard Gridley’s regiment from Massachusetts and John Crane’s Rhode Island company into a single regiment. On 17 November Congress named Henry Knox, a Boston bookseller whose volunteer service had impressed Washington, to re-

place Colonel Gridley as the artillery commander. After debate, Congress confirmed William Burbeck and John Mason as lieutenant colonels and Crane and John Lamb, commander of New York’s artillery company, as majors. Burbeck and Mason had been Gridley’s field officers in 1775. Congress ruled on 2 December that the regiment should consist of these five officers and twelve companies but left further organizational details to Washington and his advisers. (Chart 4) The regiment’s staff was similar to that of an infantry regiment except that it included cadets undergoing on-the-job training. Each company contained 5 officers and 58 enlisted men. Eight noncommissioned officers, 8 bombardiers, 8 gunners, and 32 matrosses were allowed, but Knox followed a policy of filling those positions in proportion to the real strength of each company. Bombardiers, gunners, and matrosses were all privates, but the gunners and bombardiers were specialists who received higher pay.21

The Royal Artillery was technically a separate armed service, but Washington deliberately avoided this British precedent. The Royal Artillery consisted of a single regiment organized as four 8-company (increased in 1779 to four 10-company) battalions. In peacetime each company contained 5 officers and about 50 men; in wartime it expanded to 6 officers, 4 sergeants, 4 corporals, 9 bombardiers, 18 gunners, 2 drummers, and 73 matrosses. Both the battalion and the company were administrative

HENRY KNOX (1750-1806), the Boston bookseller who created the Continental Army’s superlative artillery arm, succeeded Washington as the senior officer of the Army. He later became the first secretary of war. (Portrait by Charles Willson Peale, 1783.)

units. Tactical flexibility was provided by the use of provisional artillery “brigades” with crews for eight to ten guns.22

Knox’s companies were smaller than the British ones on a wartime footing, but their composition was more symmetrical. Like its British counterpart, the regiment was an administrative unit. Although he did not adopt the British “brigade” style, Knox distributed his companies in 1776 to man specific fortifications or batteries and had them camp with nearby infantry brigades. During the later stages of the campaign, detachments of one or two officers and crews for several guns were assigned to infantry brigades to furnish direct field artillery support. Shortages of trained artillerymen were a serious problem by summer. Knox prepared a plan to form a second regiment, and Congress approved it on 24 July. The events of the campaign, however, prevented any action to fill the regiment.23

The Pennsylvania Rifle Regiment and the four associated Virginia and Maryland companies were not reorganized at the beginning of 1776 because their enlistment terms did not expire until 1 July 1776. The regiment, however, assumed a new designation to conform with those of the infantry regiments; in recognition of the fact that the riflemen were the first Continentals, the regiment was given primacy as the 1st Continental Regiment. Washington continued to employ it as a special reserve force. Two of its nine companies had been sent to Quebec, but attachment of the remaining Virginia company and the two Maryland companies enabled it to perform its mission. Washington and Congress began planning its reorganization in the spring of 1776,

55
and Congress ordered reenlistment for a two-year term on 17 June. Combat operations, however, slowed the reorganization.24

The planning phase of the Main Army’s reorganization in 1775 was short and smooth. Congress, Washington, and his senior officers agreed on both general policy and specifics, but a real crisis occurred when Washington started to reenlist the New Englanders on 13 November. Indeed, he became so upset by the slow progress that on 4 January 1776 he complained to Congress:

It is not in the pages of History perhaps to furnish a case like ours. To maintain a post within musket shot of the Enemy…and at the same time disband one Army and recruit another within that distance of twenty odd British regiments, is more than probably ever was attempted: But if we succeed as well in the latter, as we have hitherto in the former, I shall think it the most fortunate event of my whole life.25

New England’s civil and military leaders had been very confident in October that their troops would rapidly reenlist, but by 30 December only 9, 649 men had signed up, an average of less than 1,400 a week. Another 2,808 enlisted by 3 February less than 600 a week during the first five weeks of the new year. The Commander in Chief urged the New England governments to institute a form of a draft to fill their regiments, and on 16 January Congress removed the restriction on reenlisting free Negroes. The extent to which unit commanders opened their ranks to this new source of recruits depended on their personal attitudes.26

During the transition period, Washington filled the gaps in his lines with militiamen called up for limited periods by the New England colonies. New Hampshire and Massachusetts furnished about 4,000 men during late December 1775 when Washington anticipated that Connecticut’s regiments might depart. On 16 January he called for full regiments of militia organized on the Continental pattern and for a longer period of service (until 1 April). New Hampshire had General Sullivan organize a regiment from companies already at Boston. Connecticut furnished four regiments, and Massachusetts provided six by calling on quotas from towns close to Boston.27

Another crisis was the discovery in December that many firearms were not suited for sustained military use. Washington paraded the Connecticut units on 9 December, the day before their original enlistments expired, so that he could confiscate sound weapons from owners he feared would depart. He bombarded the New England governments with requests for any available arms, particularly British Brown Besses, and sent letters to Schuyler and Montgomery begging for captured materiel. This shortage, plus problems of ammunition supply, persisted during early 1776, but the crisis passed by the summer.28