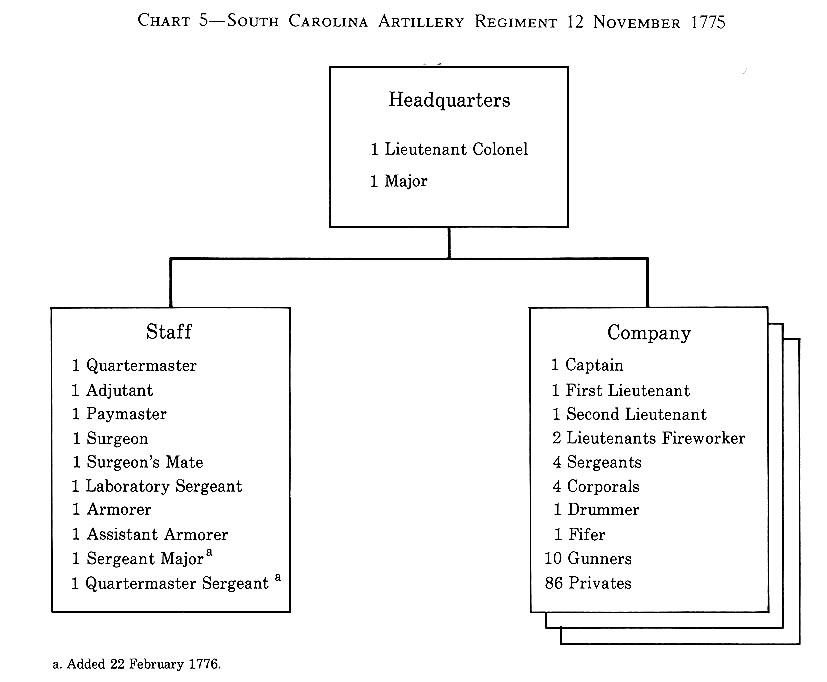 officers and one hundred men. At the same time, artillery companies were allocated for Fort Lyttleton (100 men) and Georgetown (60).12

On 4 November 1775 the Continental Congress had directed South Carolina to raise three Continental regiments with the standard Continental infantry organization. A second act, on 25 March 1776, increased the quota to five regiments. The colony did not immediately transfer its units to the Continental Army but tried simply to delegate operational control over them. Congress did not accept that alternative. On 18 June it decreed that all of the regiments except the rangers had been adopted by the earlier acts. As a major concession, however, it promised not to send more than one-third of the troops outside South Carolina without prior notice. The rangers and a similar Georgia mounted unit were adopted on 24 July with a special organization and a requirement that they seine on foot as well as on horseback. (See Table 3.) Congress restored seniority by other legislation.13

74
THOMAS SUMTER (1734-1832), “the Gamecock,” organized the 6th South Carolina Regiment and commanded it until he retired in 1778. Later in the war he became one of the most effective southern leaders of irregulars. The famous fort in Charleston harbor is named for him. (Portrait by Rembrandt Peale.)

Georgia, like North Carolina, waited for congressional support before risking military action. It had only 3,000 males of military age and was the most exposed colony. When Congress authorized South Carolina’s three regiments on 4 November 1775, it also directed Georgia to raise a standard infantry regiment. Because communications with the colony took so long, its Provincial Congress was allowed to appoint all officers, not just those of company-grade. After factions within the Provincial Congress fought for control of the regiment, a compromise gave command to Lachlan McIntosh, the leader of the Scottish element in the colony. Two representatives of the Savannah mercantile interests were named as the other field officers. Most of the company positions went to sons of the planters who constituted the “Country Party.” The Provincial Congress and the state government that succeeded it caused continual troubles for senior Continental officers by asserting a right to retain an interest in the regiment’s affairs.14

McIntosh began raising the regiment in February 1776, arming one of the companies with rifles. He correctly anticipated that limited resources would hamper his efforts: two months later the regiment had reached only half strength. Maj. Gen. Charles Lee supported the colony’s efforts to have Congress raise six additional regiments elsewhere and to station them in Georgia. Before this recommendation arrived, Congress voted to have Georgia raise two additional regiments (one of which was to be composed of riflemen) and two artillery companies to garrison Savannah and Sunbury. On 24 July Congress adopted the colony’s horse troops and expanded them into a regiment as well.15

75
McIntosh made little progress in organizing the new units despite receiving permission from Virginia and North Carolina to recruit within their borders. Low bounties, year-long enlistments, and a fear in colonies to the north that Georgia’s climate was fatal discouraged enlistments. Although the ranger regiment under his brother William did better than the infantry regiments and was on duty by late October, the colony was fortunate that British pressure was minimal.16

In many respects the first year of military preparations in the south resembled New England’s efforts in 1775. Each colony raised a separate force independently or with congressional encouragment. Regimental structures varied, although a 10-company, 500-man formation had some regional appeal. These forces gradually were adopted as part of the Continental Army. Two key differences set the south apart. The region, with little manpower to spare from a plantation economy, turned rapidly to enlisting men for long terms, typically two years. Many of the colonies also resisted surrendering full control over their troops to the national government in distant Philadelphia. All refused to comply completely with the standard eight-company structure for Continental infantry regiments.

The 1776 military effort in the south culminated on 28 June with the repulse of a British attack on Charleston, South Carolina. A return for the forces in that state shortly after the event shows that all six South Carolina regiments were there along with the 8th Virginia Regiment; the 1st, 2d, and 3d North Carolina Regiments; and a troop of North Carolina horse. Excluding the artillery and cavalry, the concentration of continentals at Charleston included 239 officers, 30 staff officers, 209 sergeants, 86 drummers and fifers, and 3,158 rank and file. About 500 were sick, and almost another hundred were absent on furlough. The force was thus well below authorized levels. The three North Carolina regiments were about half full; the 8th Virginia Regiment about three-quarters full. The three senior South Carolina regiments averaged about 350 men apiece, but the newer 5th and 6th Regiments were both still under 300.17

In addition to the concentration at Charleston, by July sizable Continental forces were on hand in all the southern states. Georgia had one infantry regiment nearing full strength and a partially organized mounted regiment. Two other infantry regiments and two artillery companies were beginning to recruit. North Carolina was held by three regiments, two troops of horse, and an artillery company. In Virginia, where Governor Dunmore was preparing to depart, eight infantry regiments defended the Tidewater area while five companies were on the frontier.

Even before the decisive victory at Charleston, Virginia had bested Governor Dunmore; North Carolina had crushed a Loyalist uprising at Moore’s Creek Bridge; and Georgia had chased off the forces of its former governor. Joint operations had silenced Cherokees in the interior. The fact that militia or minutemen had played a major role in defeating the Loyalists and Indians, however, led to difficulty in recruiting for the Continental regiments since their success had reinforced colonial leaders’ belief that militia forces were adequate for local defense. These southern leaders consequently did not give the Continental units the same support that their northern counterparts did. When General Lee left the south in the autumn of 1776, he feared that “it is not

LACHLAN MCINTOSH (1725-1806) was Georgia’s ranking Continental officer. He raised the 1st Georgia Regiment and later commanded the Western Department as a brigadier general. He is best known, however, as the man who killed Button Gwinnett—one of Georgia’s signers of the Declaration of Independence—in a duel. (Postwar portrait by Charles Willson Peale.)

impossible that the late repulse of the Enemy may be fatal to us [for] we seem now all sunk into a most secure and comfortable sleep.”18

The Middle Colonies
New Jersey, Pennsylvania, Delaware, and Maryland also participated in Congress’ expansion of the military effort in 1776. Like the south, these middle colonies were more diverse in their origins and ethnic composition than New England. On the other hand, the area was much closer to the national authority in Philadelphia. Proximity simplified communications and enabled the governments of these colonies to coordinate their efforts with Congress and to avoid the variety of unit structures of the other colonies. By waiting to raise troops until they had instructions from Congress, they also reduced their expenses.

Aside from the original 1775 riflemen, the first troops that Congress requested from the middle colonies were two regiments from New Jersey. Anticipating that the British would attack New York City, Congress on 9 October 1775 asked that colony’s Provincial Congress to replace the New York regiments that had marched to Canada. New Jersey asserted that it should name all the officers because, knowing its own citizens, it was in the best position to select the most effective men. Delegates in Congress who were committed more to local interests than national ones supported the colony, but the resulting debate was won by other delegates who hoped to strengthen Congress’ role as a national government. In practice Congress would follow a compromise by commissioning individuals from those nominated by the governments of the respective colonies.19

77
COMMISSION OF ALEXANDER SPOTSWOOD. This commission as colonel of the 2d Virginia Regiment is typical of Continental Army commissions used throughout the war. An officer was required to carry his commission at all times. The commission was a printed form showing the person’s rank, unit, and date of rank. It was signed by the president of the Continental Congress and certified by the Congress secretary.

During succeeding months the delegates resolved most of the other questions relating to appointment of officers and seniority. Congress strengthened its authority by ruling that officers elected on the same day took seniority according to the order in which their names appeared in the minutes of Congress. Promotions made to fill a vacancy were considered effective on the date that the vacancy occurred. Congress also steadfastly maintained a right to promote officers without regard for seniority in cases of exceptional merit. Delegates from the middle and southern colonies were aware that strict adherence to seniority would allow New England to dominate Army leadership.20

Congress appointed the field officers that the New Jersey Provincial Congress had recommended. Lord Stirling of the 1st New Jersey Regiment and William Maxwell of the 2d were veterans of the French and Indian War, militia colonels, and important politicians. The Provincial Congress raised sixteen companies by apportioning them among the counties according to their respective militia strength. The composition of regiments reflected the territorial subdivisions of the colony. East Jersey, the north

New Jersey delegate William Livingston secured authorization for a third regiment when Congress ordered the Id to Canada. Its commander, Elias Dayton, had the same military and political credentials as the two other colonels. This regiment was raised on a colony-wide basis during the early spring of 1776. The provincial Congress disbanded its minutemen at the same time. It also created two companies of artillery. These companies, one for East Jersey and one for West Jersey, were regular state troops designed to support the militia. On 1 March 1776 Congress rejected New Jersey’s effort to have them adopted as Continentals and its offer to raise two more regiments.22

On 7 March 1776 Lt. Col. William Winds replaced Lord Stirling as commander of the 1st New Jersey Regiment. Matthias Ogden, who had gone to Boston as a volunteer, became the new lieutenant colonel. The 1st and 3d went to New York, although two companies of the latter were briefly diverted to protect Cape May. Washington later sent the 1st to join the Id in Canada and the 3d to serve in the Mohawk Valley.23

Pennsylvania, like New Jersey, was relatively untouched by operations in 1775. Because it lacked a compulsory militia, the Quaker-dominated colony relied on volunteers, known as associators. The Pennsylvania Assembly assumed responsibility for supervising the associators on 30 June 1775. Under the leadership of Benjamin Franklin, the colony’s Committee of Safety then began vigorous preparations; by the end of September, it had expended large sums and had drafted rules and regulations for the associators. For the benefit of the large German-speaking minority, the committee printed the regulations in German as well as in English.24

On 12 October 1775 Congress authorized the colony to raise a regiment. The assembly appointed company officers and began recruiting almost immediately, but it did not nominate field officers until November. The companies, recruited across the colony, assembled in the capital on 11 January 1776. At that point the officers objected to the appointment of Col. John Bull as commander and forced his resignation. John DeHaas, veteran of the French and Indian War, replaced Bull. The regiment, with eight companies in conformity with the Continental model, reached Quebec in time to participate in the closing moments of the siege.25