Skip to content
Advertisements
79
ANTHONY WAYNE (1745-96) raised the 4th Pennsylvania Battalion in 1776 and commanded the Pennsylvania Division as a brigadier general during most of the war. In 1792 he replaced Arthur St. Clair as the senior officer of the United States Army and led the Army to victory in the battle of Fallen Timbers three years later. His nickname, “Mad Anthony,” did not become popular until after the Revolution. {Portrait attributed to James Sharples, Sr., 1795.)

raise a full regiment, and Congress rewarded this enthusiasm on 4 January 1776 by directing Pennsylvania to raise a sixth regiment there. Congress appointed officers for it according to the county’s wishes. One company of every regiment except the 1st Pennsylvania Battalion was armed with rifles, although Congress attached Capt. John Nelson’s independent rifle company to the 1st for most of 1776. Congress had accepted that company, organized by the Berks County committee of safety, on 30 January.26

Pennsylvania hoped to retain a voice in the use of its regiments through having them serve as a unified brigade.27 Such a course would also allow it time to train the junior officers, who were considered “pretty generally men of some Education, capable of becoming good officers, [and] willing to do their duty.”28 The Canadian crisis, however, prevented any such systematic deployment. Congress quickly ordered north the 1st, 2d, and 4th (under Benjamin Franklin’s protege Anthony Wayne). A shortage of arms delayed the movement of the other regiments and led Congress to toy with the idea of arming Robert Magaw’s 5th with pikes instead of muskets. The 6th later reached Canada, but the 3d and 5th went only as far as New York City.29

During the summer of 1776 Congress authorized Pennsylvania to raise two more regiments for special missions. In the first instance Congress became concerned with preserving the neutrality of Indians on the frontier. On 11 July it ordered General Schuyler to raise a regiment to garrison several key points in New York and Pennsylvania. Seven of the companies were raised in Westmoreland County and the eighth in adja-

80
WILLIAM SMALLWOOD (1732-92) became the first commander of the 1st Maryland Regiment after leading his colony’s opposition to British policies. He rose to the rank of major general and became governor of Maryland after the Revolution. (Portrait by Charles Willson Peale, ca. 1782.)

cent Bedford County. Westmoreland County had already organized an independent company of 100 men under Capt. Van Swearingen to protect its frontier. On 16 June the Pennsylvania Assembly had accepted this company as a state unit and had stationed it at Kittaning. Swearingen’s company became part of the new regiment. Aneas Mackay, a former British officer living in Westmoreland County, was appointed colonel on 20 July, but a food shortage prevented concentration of the regiment until mid-December.30

Mackay’s regiment was not responsible for defense of the colony’s northern border (Northumberland and Northampton Counties), and Congress authorized a second regiment to secure that region on 23 August. Commanded by Lt. Col. William Cook, it contained only six companies, and it did not complete organization in time to participate in the operations of 1776. By having Cook’s unit cooperate with two separate companies from the Wyoming Valley, Congress intended in effect to provide a full regiment to defend the frontier. The valley was claimed by both Pennsylvania and Connecticut, but the latter colony exercised effective control and organized the companies under Capts. Robert Durkee and Samuel Ransom.31

Delaware responded promptly when Congress assigned it a single Continental regiment on 9 December 1775. It appointed company officers on 13 January, and six days later Congress approved the field officers. The regiment assembled at Dover in March and began training under the tutelage of Thomas Holland, the adjutant, who was a former British captain. Several companies skirmished with British landing

81
parties from the frigate Roebuck, but most of the regiment lacked weapons until July. It obtained muskets in Philadelphia, and in August the regiment set out to join the Main Army at New York City.32

Maryland was not in any immediate danger in 1775. On 14 August it merely reorganized the militia and established forty minutemen companies. Lord Dunmore’s activity in Chesapeake Bay, however, caused the Maryland Convention to reconsider the colony’s defenses. On 1 January 1776 the convention approved the concept of raising regular troops. Two weeks later it disbanded the minutemen and replaced them with a force of state troops. (See Table 3.) Maryland formed one regiment of nine companies from the northern and western parts of the colony and organized it along lines similar to those of the Continental Army except for the addition of a second major and a light infantry company. The light company, armed with rifles, had a third lieutenant instead of an ensign. It had 64 privates, 4 more than the line companies. The total number of privates in the regiment was the same as in a regiment with eight 68-man companies. The convention also formed 7 separate companies of infantry with 92 privates each, plus 2 artillery companies with the same organization to defend Annapolis and Baltimore.33

The regiment’s officers came from the colony’s political leadership. Col. William Smallwood, Lt. Col. Francis Ware, and four captains had been members of the Maryland Convention. Both majors had prior service: Thomas Price had commanded one of the Continental rifle companies in 1775, and Mordecai Gist had organized the first Maryland volunteer company in 1774. The regiment and three of the separate infantry companies reached New York on 9 August. The remaining four infantry companies under Thomas Price did not join them until 19 September, after they had been released from coastal defense. When Congress formally assigned Maryland a quota of two Continental regiments on 17 August 1776, the colony simply transferred the regiment and independent infantry companies (equivalent to two regiments) to the Continental establishment without providing a second regimental staff.34

Two other regiments raised during the summer of 1776 drew their manpower primarily from the middle colonies. When the British introduced German auxiliaries, American propagandists condemned them as “Hessian mercenaries,” but Congress responded by mobilizing the German-American population. On 25 May Congress authorized the German Battalion. Men of German descent and immigrant Germans were recruited in Maryland and Pennsylvania for three-year terms. Each colony furnished four companies. Congress appointed Maj. Nicholas Hausegger of the 4th Pennsylvania Battalion as colonel; Capt. George Stricker of Smallwood’s Maryland light company, as lieutenant colonel; and Ludowick Weltner of Maryland, as major. All three were leaders in the German community. On 17 July Congress authorized a ninth company to be raised in Pennsylvania as a direct result of Washington’s recommenda-

82
tion of John David Woelper, a lieutenant in the 3d Pennsylvania Battalion who had served in the French and Indian War.35

Congress authorized another joint unit on 17 June as the Maryland and Virginia Rifle Regiment. Like the 1st Continental Regiment, on which it was modeled, its cadre came from the Continental rifle companies of 1775. Daniel Morgan’s Virginia company had been captured at Quebec, but the men of the other Virginia rifle company and of both Maryland companies were at New York and were reenlisted on the same terms as those of the 1st Continental Regiment. Four additional companies were raised in Virginia and three in Maryland, all in the northwestern parts of each colony. Capts. Hugh Stephenson, Moses Rawlings, and Otho Holland Williams became the regimental field officers, retaining their relative seniority. Some of the companies had still not joined the regiment before it was captured at Fort Washington, New York, in November.36

During late 1775 and 1776 Congress thus called on the four middle colonies to raise over 11,000 men for the common military effort. New Jersey, Pennsylvania, and Delaware formed ten regiments. Maryland organized the equivalent of two more regiments as state troops, but when Congress asked, it transferred them to the Continental Army. Four other regiments were added during the summer of 1776, two through joint recruiting efforts. Like the first units of other colonies, these regiments attracted men of talent, influence, and experience as officers. Except for Maryland, which behaved more like Virginia than like the other middle colonies, each concentrated on improving its militia and turned to regular troops only at the request of Congress. That fact eliminated most of the variation in organization that had been a problem in the north in 1775 and that was still complicating the southern military effort. As soon as the issue of authority in appointing field officers was resolved, the middle colonies’ regiments blended smoothly into the Army. Seven went north, and the equivalent of six others joined Washington’s Main Army at New York City.

The Departments and the Main Army
The addition of Continental regiments from the southern and middle colonies raised a new issue of command. Congress reacted by extending the territorial concept that it had implemented with the New York and Canadian Departments. On 13 February it appointed a committee “to consider into what departments the middle and southern colonies ought to be formed, in order that the military operations. . . may be carried on in a regular and systematic manner.”37 Following the committee’s recommendations, Congress created two new territorial departments on 27 February 1776. Virginia, the Carolinas, and Georgia became the Southern Department. New Jersey, Pennsylvania, Delaware, and Maryland joined New York as Schuyler’s Middle Department. Three days later Congress placed Charles Lee in command of the former and elected six new brigadier generals as subordinate commanders for the new departments. John Armstrong of Pennsylvania, Andrew Lewis of Virginia, and North 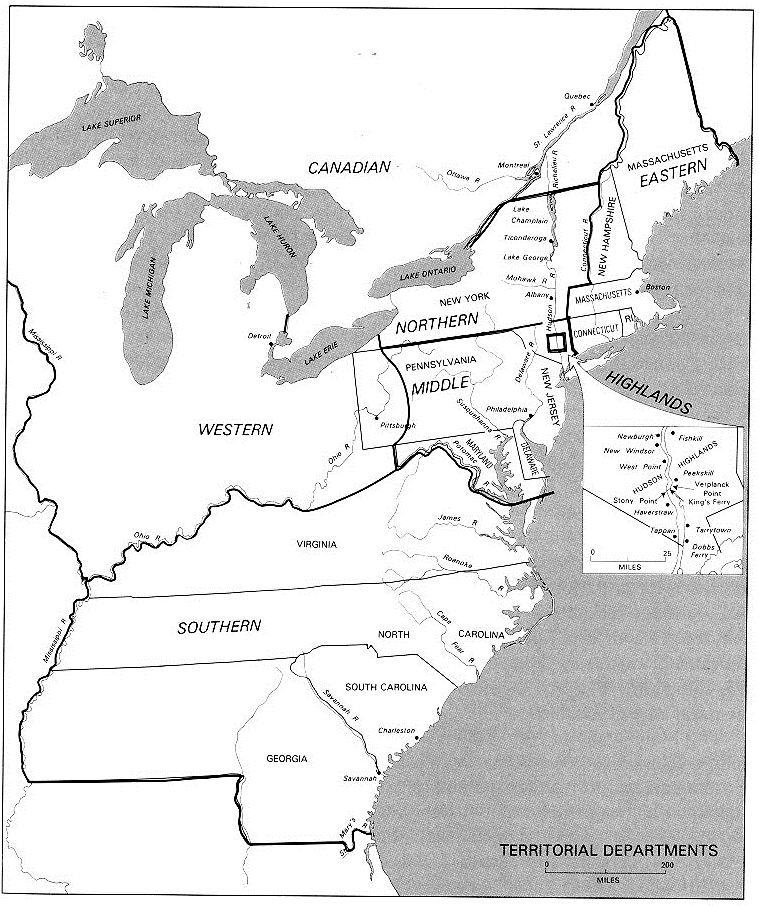 Washington remained as Commander in Chief and held command in the “Military District” of New England. Congress intended each of the four territorial departments (Southern, Middle, Northern, and Canadian) to have a major general and two