Skip to content
Advertisements
139
pedition Against the Ohio Indians in the Year MDCCLXIV and later served as a handbook for the Continental Army.43

Although Frederick the Great of Prussia dominated military science at mid-century, his success came from his personal genius and incredible capacity for work. His Army, trained through years of drill, resembled a machine. The widespread imitation of the Prussian Army only mimicked its external forms. Real theoretical development grew out of France’s humiliating defeat in the Seven Years’ War. In the aftermath, prolonged debate took place between advocates of heavy, massed infantry formations assaulting with the bayonet (the ordre profond) and proponents of linear tactics that maximized infantry firepower (the ordre mince).44

An important doctrinal development occurred in 1766 when the Comte de Guibert presented the French War Ministry with a memorandum introducing a compromise ordre mixte. This memorandum, subsequently refined and published in 1772 as the Essai General de Tactique, stressed flexibility and utility. Infantrymen, trained for both line and light infantry duties, deployed in line, column, or a combination of both, depending on the tactical needs of the particular situation. Guibert drew heavily on Gribeauval; artillery supported the infantry by firing on enemy troop formations, preferably from massed batteries. Although the French Army did not formally adopt Guibert’s ideas until 1791, war games, particularly ones held in 1778 at Vassieux, Normandy, tested the merits of the different systems and converted many officers to the mixed order.

Americans closely followed European military developments. If European authors tended to dismiss America as atypical because of the nature of its terrain and Indian warfare, American officers in turn were selective in accepting European ideas. Nathanael Greene summarized this attitude in December 1777 when he cautioned a council of war that “experience is the best of schools and the safest guide in human affairs—yet I am no advocate for blindly following all the maxims of European policy, but where reason corresponds with what custom has long sanctified, we may safely copy their Example.”45 This insistence on filtering theory through practical experience led Washington and others to value Saxe and Guibert for their flexibility. It also contributed to the intense interest in petite guerre, or partisan operations, which seemed to fit the “natural genius” of Americans for ranger operations. In fact, interest in such operations led to a reprinting in 1772 of Thomas Church’s History of the Great Indian War. First published in 1716, this account of the ranger tactics developed between 1675 and 1715 by Col. Benjamin Church in operations against New England Indians, was the only significant American military work published before the Revolution.46

140
JEAN-BAPTISTE, CHEVALIER DE TERNANT (1751-1816) was a French volunteer who served as the Southern Department’s deputy inspector general from 1778 to 1782. After the Revolution he became a colonel in the Dutch and later French armies and briefly returned to the United States as minister of France in 1791. (Portrait by Charles Willson Peale, 1781.)

In 1777 Washington issued standing orders directing Continental officers to use their spare time to read “military authors.” Foreign observers recognized that this official policy was a sign of growing professionalism, and a number contributed their time and advice to foster the trend. Thomas-Antoine, Chevalier de Mauduit du Plessis, for example, was particularly instrumental in introducing the Army’s leaders to Guibert’s writings. Du Plessis, a graduate of the rigorous Grenoble artillery school, had proved his skill and gallantry at Germantown and in the defense of Fort Mifflin. He became a respected teacher at Valley Forge.47

Frederick von Steuben played an even more important role. “The Baron,” as he came to be known, was a Prussian veteran. He had served as a junior infantry officer for ten years with responsibility for training troops. In 1757, as a reward for gallantry in action, Steuben became the principal staff officer of one of the Prussian “free corps” organized to counter Austrian light troops. This duty exposed him to a less rigid form of military organization and gave him valuable administrative experience. He progressed rapidly, and in 1762 he joined Frederick the Great’s special corps of aides. This assignment provided him with the best staff training available in the eighteenth century. When Army politics forced his retirement in 1764 as a captain, he spent the next decade as the chamberlain of a minor prince.48

During 1777 Steuben offered his services to Benjamin Franklin, using the Comte de Saint-Germain as an intermediary. The three men prepared credentials falsely identifying Steuben as a lieutenant general. Congress accepted him as a volunteer without rank, and on 23 February 1778 he arrived at Valley Forge. After inspecting the troops

141
and conferring with senior officers, Steuben told Washington that the continentals were the finest raw material for an army he had ever seen. Washington promptly assigned Steuben to prepare a system of “discipline, maneuveres, evolutions, [and] regulations for guards.”49

Steuben analyzed existing practices, based primarily on the 1764 British manual, and compared them to European systems. As he later wrote Franklin, “circumstances. . . Obliged me to deviate from the Principles adopted in the European Armies…. Young as We are, We have already our Prejudices as the most ancient Nations, [and] the prepossession in favor of the British service, has obliged me to comply with many Things, which are against my Principles.”50 Steuben’s genius led him to develop a new system rather than to modify an existing one. He simplified the British manual of arms and slowed its prescribed tempo to improve execution. Marching in a column four abreast instead of in single file allowed more compact formations and dramatically improved battlefield deployment. He increased the marching pace from the English 60 two-foot steps per minute to 75 (the Prussian norm). He set doubletime at 120. To complement the Continental Army’s excellent musketry, Steuben also emphasized bayonet training. He and Washington made officers responsible for drilling the troops. Steuben drew on many precedents, including Prussian, English, and American practices. Foreign officers recognized the uniqueness of the mixture and noted its efficiency.51

To speed the learning process, Washington organized a provisional “model company” as an adjunct to his guard. On 19 March, Steuben personally began to train this company. His colorful curses, delivered in a variety of languages, amused the large crowds that assembled each day to witness the spectacle. This calculated psychological effect contributed to the Baron’s popularity and the smooth adoption of the drill. Members of the model company and selected officers then spent six weeks instructing all other units at Valley Forge and later extended the system to the rest of the Continental Army.52

Steuben produced a simple but efficient method for maneuvering on the battlefield. Like Guibert and other French theoreticians, he used both column and line to achieve tactical flexibility. Divisions and brigades marched in closed columns for speed and control and rapidly deployed into line for musket fire or bayonet charge. Skirmishers, either light infantry or details from line units, covered the columns during advance or withdrawal. They kept one hundred yards (the effective range of a musket) from the column to prevent enemy harassment of the main body. As soon as the column deployed into line, the skirmishers withdrew through gaps and re-formed. The men maintained silence when marching.53

In the fall of 1778 a board of generals reviewed Steuben’s drill and suggested only one improvement: replacing the traditional command “Present!” with “Take Sight!” as the order immediately preceding “Fire!” Washington agreed and made the change. This emphasis indicated the Continental Army’s continued reliance on marksman- 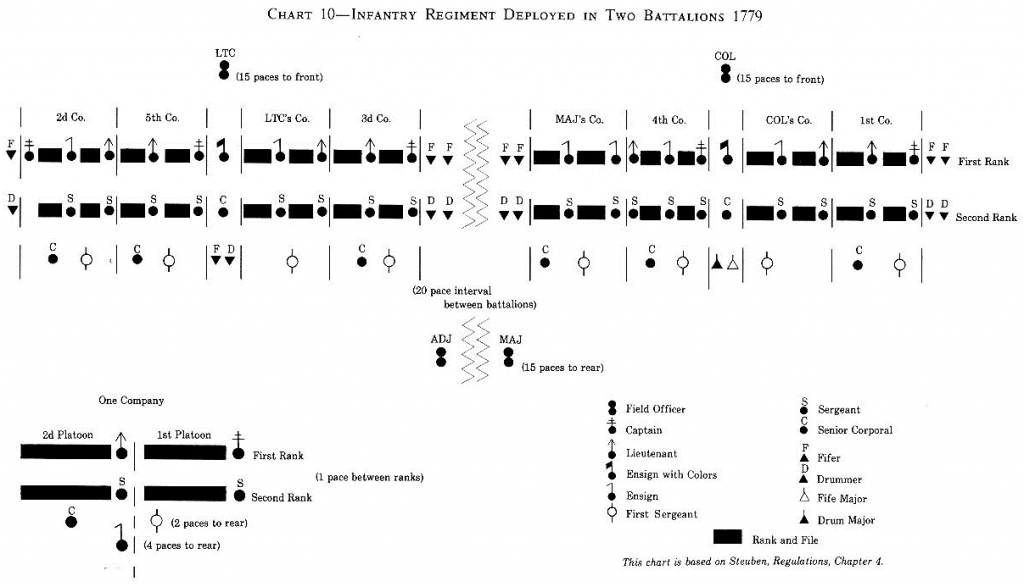 143
ship.54 Steuben polished the text. Pierre L’Enfant drew illustrations, and on 29 March 1779 Congress approved publication of the drill. Almost every officer received a copy. Washington overruled Steuben’s desire to classify it as a state secret because he hoped that the militia would also adopt the drill so that replacements would be properly trained before they joined the Army.55

Steuben’s Regulations for the Order and Discipline of the Troops of the United States, Part I (better known as “The Blue Book”) covered all aspects of infantry service. It specified that a regiment deploy tactically in eight companies, each under its own officers. (Chart 10) This system prevented the type of confusion that had crippled the Hessians at Trenton. A regiment with more than 160 files (320 privates and corporals) formed as two 4-company battalions; those with less than 80 files (160 men) either temporarily combined with a second small regiment or did not take a place in the line of battle. A special 12-man color guard gave each regimental commander an emergency reserve force. Light infantry companies either deployed as skirmishers or in provisional battalions. The column became the standard maneuver formation; training emphasized movement through broken terrain and rapid deployment into line. Bayonet charges were designed to maximize their shock effect.56 In addition, the regulations improved the efficiency of the trains so that the Army could move without encumbrance and still fight a sustained engagement immediately. The specified routine of daily life emphasized health and morale.

The Regulations also stressed the importance of regimental administration. An appendix clearly explained the functions of every individual in a regiment from its commander to its lowest private. Senior noncommissioned officers received training to supervise the four squads that formed each company and to act as staff officers in an emergency. The attitude that permeated the Regulations was summarized in the direction that a captain’s “first object should be, to gain the love of his men, by treating them with every possible kindness and humanity, enquiring into their complaints, and when well founded, seeing them redressed. He should know every man of his company by name and character.” This attitude put the Continental Army in the forefront of the most progressive military thinking of the period.57

Steuben’s contributions to the Continental Army did not stop with The Blue Book, for he also served in a new staff office, that of Inspector General. Between 1778 and 1780 this office grew, and Steuben emerged as Washington’s de facto chief of staff. Baron Henry D’Arendt, commander of the German Battalion, first suggested adding an inspector general to the staff. A council of war endorsed the suggestion as a way to use foreign expertise with minimum disruption. Congress altered the concept on 13 December 1777 when it authorized two inspectors general, one of whom was Gen-

144
ENLISTMENT FORM OF PRIVATE PHILIP SHAFER. By the second half of the Revolution, the Army’s paperwork attained a high degree of sophistication. Private Shafer enlisted in the Marechaussee Corps on 15 February 1780. He then signed this printed form which recorded the term of his enlistment, his receipt of his enlistment bounty, and his having taken his oath of enlistment. Notice that Private Shafer was illiterate.

eral Conway. Congress required the inspectors to see that every officer and soldier was “instructed in the exercise and manoeuvres which may be established by the Board of War.” Their other duties, “agreeable to the practice of the best disciplined European Armies,” related to discipline, paperwork, and investigating fraud. They reported directly to Congress, not to the Commander in Chief.58 Washington ignored Conway and used Steuben, with his superior credentials, to regain control of this office. On 28 March 1778 he appointed Steuben as temporary Inspector General. Four subinspectors acted as division-level assistants, and one major from each brigade extended the system to that echelon. The first duty of these subinspectors and majors was implementing Steuben’s drill.59 After experience proved the utility of this arrangement,