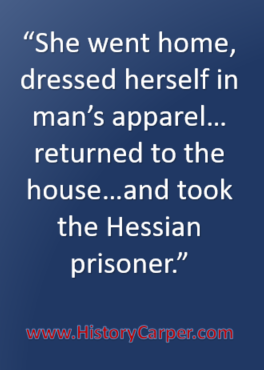 March 20. –This morning, a young woman passing an evacuated house in Woodbridge, New Jersey, saw through the window a drunken Hessian soldier, who had straggled from his party. There being no men within less than a mile of the town, she went home, dressed herself in man’s apparel, and armed with an old firelock, returned to the house, entered it, and took the Hessian prisoner, whom she soon stripped of his arms and was leading off, when she fell in with the patrol guard of a New Jersey regiment, stationed near Woodbridge, to whom she delivered her prisoner.1