From Diary of the American Revolution, Vol II. Compiled by Frank Moore and published in 1859.

March 4.—Yesterday, the British forces, under the command of Colonel Prevost, defeated a party of General Lincoln’s army, under General Ashe, near the junction of Briar Creek and the Savannah River. The following is the British account of the affair:—”The rebel army having penetrated, with near two thousand men, partly Continentals and partly militia, as far as Miller’s burnt bridge, on Briar Creek, Colonel Prevost thought prudent to allow them to repair it, and to draw them on the south side of the creek before they were attacked; but information being received that they had sent off all their carts and wagons to Burton’s ferry, over Savannah River, and proceeding but slowly in the repairs of the bridge, the colonel concluded that they had no further object in view, and that they meant to return shortly, in consequence of which, he ordered the first battalion of the 71st regiment, with about one hundred and fifty of the Carolina volunteers, to proceed to Buck Creek, three miles south of the burnt bridge, in order to mask the advance corps, with which he took a circuit of fifty miles in order to come on their rear, and attack them with five field-pieces, about eight hundred and fifty regulars, and about one hundred and eighty or two hundred of the Carolina volunteers and rangers. The march was begun privately on the first day of March, in the evening. The troops marched all night, and arrived about ten o’clock the next day, at a place where the rebels had lately destroyed a bridge. A temporary one was constructed, but for want of grapnels and cables, could not stand the strength of the current, the creek being both wide and rapid. A pontoon was then substituted, and though it occasioned considerable delay, the troops and artillery were carried over before daybreak on the third instant. The light infantry and the horse had been sent forward the preceding evening, to prevent the retreat of the enemy, and to conceal the intended movement. The scouts gave advice that they had discovered some parties of the enemy, when they were reinforced with a view to attack them, and to prevent their retreat to the main body of their army, and at the same time to conceal the march of the regular troops. In the attack, part of them escaped over the river, having a ferry there, a few of them were taken, and some saved themselves by the great speed of their horses; but as they had not discovered the troops, it gave no kind of apprehension that it would alarm them, otherwise than to induce them to send a party in quest of the scout we had shown in the rear.

“The prisoners we had taken concurred in their declaration, that the rebels were unapprised of the vicinity of any enemies, and trusting much to their superiority in numbers, were in the most perfect security. They also said that Major Boss, with three hundred light horse, had joined their army the preceding evening.

“The troops continued their march, and by half after four in the afternoon, the flying parties of horse drove in the enemy’s picket, and took some prisoners, who informed us that they knew not of any number of troops but only a few scouters coming. The troops were rapidly formed, with the light infantry on the right, and two field-pieces were ordered to penetrate by a road leading towards the left of the rebel army. The centre was composed of the 2d battalion 71st, with some rangers, and Carolina foot on their left, and one howitzer and two six-pounders in their front. About one hundred and fifty horse were ordered to take the left of the whole, to turn the right flank of the enemy. A reserve was formed about four hundred yards to the rear, and consisted of three companies of grenadiers from Florida, and a troop of dragoons. About forty or fifty riflemen were posted to ambuscade a place through which the rebels might attempt, under cover of a swamp and thicket, to attack our left and rear.

“The enemy began a scattering fire of musketry, and fired some cannon, but were put to flight in an instant. They could not stand the spirited attack of Sir James Baird’s light infantry on our right, and from that instant the success of the day was decided. They were pursued to the creek, into which, after throwing away their arms, the most active plunged and escaped by swimming; their right had no means of escaping, but over a lagoon very deep and broad, and then to cross the river Savannah. In that place, numbers have been drowned and perished, many were killed in the pursuit, and about one hundred taken prisoners. General Ashe, the commanding officer of their army, with some other officers of note, were mistaken by the 2d battalion 71st for some of our own people, as they passed by them and took off their hats. Brigadier-General Elbert, Colonel M’lntosh, two other colonels, and twenty-three more officers have been taken, seven pieces of cannon, several stand of colors, their baggage, arms, ammunition, and every thing, in short, fell into the hands of the brave, victorious troops. Not a whole platoon of the rebel army escaped together, on our right or left. The panic occasioned by the terror of the bayonet, left them no alternative but that of plunging into the water, many of which, we are since informed, have been met without any other clothes but a shirt and breeches, and without arms, numbers of them badly wounded; few would have escaped if night had not come on so soon. 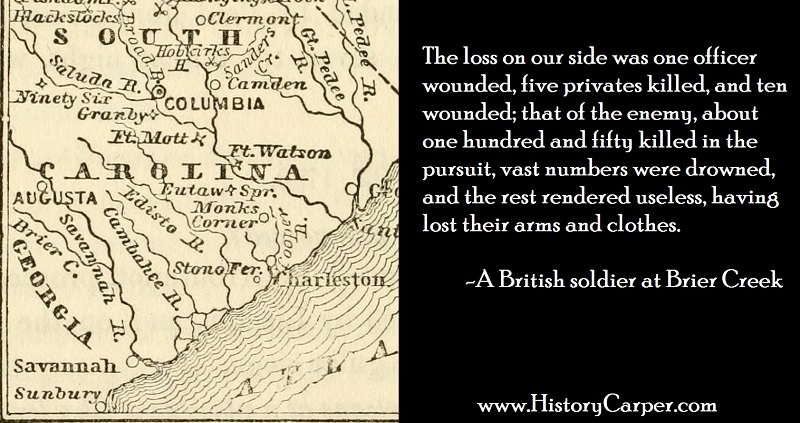 “The loss on our side was one officer wounded, five privates killed, and ten wounded; that of the enemy, about one hundred and fifty killed in the pursuit, vast numbers were drowned, and the rest rendered useless, having lost their arms and clothes.

“The coolness and intrepidity of the troops was conspicuous; not a word was heard but what was expressive of a wish to come up with the enemy; a cheerful, smiling countenance appeared on every side; the confidence of the troops was, to a degree, a sure and certain sign of the success they met with. Notwithstanding every fatigue, and even want of provisions for the whole day of the engagement, the troops formed, advanced rapidly, changed their disposition, and manoeuvred with as much ease as they could have done on the same ground had no enemy been in sight.”1

1 New York Gazette, March 29. “The British account of this action,” says Clift in his Diary, “is much more satisfactory than the rumors we get from our own people, (the Americans.) There is great reason to believe that some one is to blame for the defeat, as I hear the position was good and the men were willing” Gordon says: “Upon the appearance of the British light infantry, Ashe said to Elbert, who commanded the Continentals, ‘Sir, you had better advance and engage them.’ The Continentals did not exceed one hundred rank and file; but upon Elbert’s ordering them, they formed, advanced thirty yards in front of the enemy, and commenced a very sharp fire upon them, and continued it about fifteen minutes. Ashe and the North Carolina militia remained about one hundred yards in the rear, entirely inactive. Instead of advancing to support the Continentals they were struck with such a panic at being so completely surprised that they went to the right about, and fled in confusion without discharging a single musket.”—History of the American Revolution.