Sir,
The extravagant Notions which some Men entertain from the Influence of Education and Custom, may be thought worth Notice in your Paper, if we consider only, that the Sufferings of its late Publisher were owing in a great measure to his carrying it on in an unusual Method. Had he staid till some Gentlemen of the best Reputation in our Country had run the venture of being witty, and wrote a competent Number of Joco-Serious Dialogues, he might have continu’d his Paper without incurring the charge of Shocking and Heaven-rending Blasphemy! I must ask Mr. Symmes‘s Pardon, if I improve his late Joco-Serious Discourse concerning Regular Singing, in Vindication of the Courant: And if I am as merry with the Anti-Couranteers as he is with the scrupulous Consciences of his Anti-Regular-Singers, I may yet hope to find Five able Hands in Town and Country, who will (at least) approve of the Substance and Design of this Letter.

And now, you Gentlemen, who are the avowed Enemies of the Courant, let me beseech you to beware of a certain Joco-Serious Dialogue, wrote by a Clergyman, (Heaven forgive him!) which inevitably tends to the Subversion of your Religion. Have you not often said, that the Courant offended GOD because it offended good People? And has not he (think you) offended many a weak Brother, almost as weak as your selves, by declaring against the good old Way of Singing? Are not the Select-Men of Milton good Men, who have the Protestant Religion so much at heart as to forbid the teaching of Regular Singing in their Borders, lest it should infect the whole Town with Popery; and will not they (think you) be offended with this abominable Joco-Serious Confabulation? You make a grievous Complaint against the Courant, because (you say) it exposes the Failings of particular Persons. And does not Mr. Symmes (not to mention all his broad Hints) in Scorn call one of his Neighbours a good Man who is shy of his Bible, &c. Nay does he not say of one whom he calls a Reverend Brother, that whatever he is for a Christian, he is but a poor Tool of a Scholar, and ridicule him both in English and Latin? Phy upon him! Has he never heard of the Fate of Mr.Turner (a Gentleman of the Law) who was indicted by the Grand-Jury of Plymouth County for prophaning the Name of Justice O —— s, for which he was oblig’d to stand at the Bar and plead Not Guilty before the whole Court? And does he not know, that a famous Country Justice sent a Warrant after poor Jeremiah Levett of Rochester, because he (being of no good Name and Fame) did upon the 19th Day of March, 1717,18. give out and utter reviling and blasphemous Words against a Justice of the Peace? I can assure him this is true, for I have a Copy of the Warrant now in my Hands. And is it not a greater Crime to write Blasphemy against a Minister of the Gospel, than to give out and utter reviling and blasphemous Words against a Justice of the Peace? But further Gentlemen, I desire you to consider how intollerably he has abus’d your Ancestors, by saying, that some of your Fathers and Grandfathers could not read, and that they are gone to Heaven the wrong way.The Reverend Mr. Alsop indeed says, that some Men are sent to Heaven upon pain of Death; but shou’d you meet with such a Phrase in the Courant, wou’d you not presently affirm it to be against the Principles of Religion? I have but one thing more to observe to you, Gentlemen, and that is, that you bitterly inveigh against the Courant when you find things serious and comical inserted in the same Paper, tho’ in different Pieces: But has not Mr. Symmes quoted Texts of Scripture in the same Page wherein he reproaches the Anti-Regular-Singers with their Ignorance of the Gun-Powder-Plot? And has he not mixt the Faithful Servants of Jesus Christ, Learning and Wisdom and Piety, Family Religion, &c. in the same Page with Barns, Ploughs and Carts, and whole Barrels of Herring? Is he not often very witty and good humour’d at the proper Cost and Charge of Solomon, the Prophets and Apostles? &c. What else can you make of his saying, (p. 34.) ‘In Plain English Neighbour, a broad Laugh, is all the Answer such whymsical Objections deserve: or rather, a hearty Scoul or deep Sigh, to observe the doleful Effects of Man’s Apostacy. To be oppress’d with such Objections would make a wise man mad, Eccl. 7.7.?’ 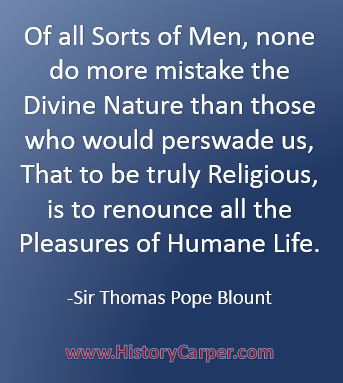 Upon the whole, Friend Janus, we may conclude, that the Anti-Couranteers are a sort of Precisians, who mistaking Religion for the peculiar Whims of their own distemper’d Brain, are for cutting or stretching all Men to their own Standard of Thinking. I wish Mr. Symmes‘s Character may secure him from the Woes and Curses they are so free of dispensing among their dissenting Neighbours, who are so unfortunate as to discover a Chearfulness becoming Christianity. Sir Thomas Pope Blount in his Essays, has said enough to convince us of the Unreasonableness of this sour Temper among Christians; and with his Words I shall conclude.

‘Certainly (says he) of all Sorts of Men, none do more mistake the Divine Nature, and by consequence do greater mischief to Religion, than those who would perswade us, That to be truly Religious, is to renounce all the Pleasures of Humane Life; As if Religion were a Caput Mortuum, a heavy, dull, insipid thing; that has neither Heat, Life, nor motion in it: Or were intended for a Medusa‘s Head to transform Men into Monuments of Stone. Whereas (really) Religion is of an Active Principle, it not only elevates the Mind, and invigorates the Fancy; but it admits of Mirth, and pleasantness of Conversation, and indulges us in our Christian Liberties; and for this reason, says the Lord Bacon, It is no less impious to shut where God Almighty has open’d, than to open where God Almighty has shut. But, I say, if Men will suffer themselves to be thus impos’d upon, as to Believe, That Religion requires any such unnecessary Rigours and Austerities, all that can be said, is, The fault does not lye in Religion, but in their Understandings; Nor is this to paint Religion like her self, but rather like one of the Furies with nothing but Whips and Snakes about her. And so, they Worship God just as the Indians do the Devil, not as they love him, but because they are afraid of him. It is not therefore to be wonder’d, that since their Notions of God are such, their Way of Worship is agreeable thereunto; And hence it is, That these Men serve our God, just as some Idolaters Worship theirs; with painful Convulsions of Body, and unnatural Distortions of Face, and all the dismal solemnities of a gloomy Soul, and a dejected Countenance. Now these are the Men, who upon all Occasions are so apt to condemn their Brethren, and, as if they were of God’s Cabinet Council, pretend to know the Final Decrees of the Almighty. But alas! who is sufficient for these Things? Certainly, no Man can render himself more foolishly ridiculous, than by meddling with these Secrets of Heaven.’

I am, Sir, Your Humble Servant,
Timothy Wagstaff.